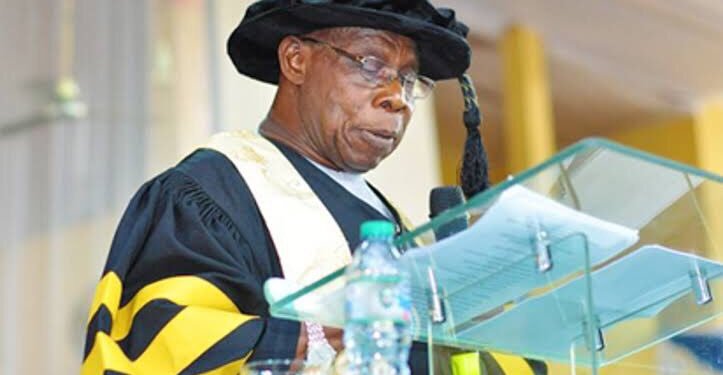 Obasanjo, while delivering the keynote address at the book launch in honour of Adedibu at the Trenchard Hall of the University of Ibadan, said the late statesman was a honest politician who left good legacies.

The former president, who wrote the foreword in the book titled “Adedibu the strongman and generalissimo of Nigerian politics, ” said the late politician helped the PDP to win the governorship in Oyo State when he was the president.

Obasanjo said, ” He did many good things . He was one of those who left good legacies in politics in the South-West. I knew him very late but he once told me he contested election in 1954 and I was in secondary school then.

“He said he contested in 1954 against the father of the man who was seeking to contest governorship election then ( 2003). I looked at him again and he said he was sure of what he said.

“Baba was good to us and that is why I came here today and the same thing for some of the people here. We would not have been able to produce a PDP governor in Oyo State when I was the president.

“I went to Baba Alayande when I was the president because he took me as a son. I asked him, Baba, don’t you love me again? I said why don’t you support our party? He told me that the person who was in control then was not competent to be governor in Oyo State and I understood.

Standby Helicopter Was To Bring Igboho To Nigeria, But…

“I called Baba Adedibu and he confirmed what Baba Alayande told me. He told me that if we conducted primary election 100 times, that person would win because he was in control of the party then.

“Baba Alayande had hinted me that the person was not competent to be governor and Baba Adedibu said he would win the governorship primary. Then I said if he won the primary election, how would he win the election? Baba Adedibu told me that if I wanted it to be done, it would be done and I told him to do it. That was how we won.

“After we had won, I asked Baba to help us maintain peace and it was so. But some people do think they are wiser than the elders. You younger ones here, don’t disrespect the elders.

“There are things that cannot be bought. Long life is given by God’s grace and position is given by God. If you want to occupy any position by force, God will just laugh at you and if you take it by force, at the time you least expect, God will take it away from you.”

Obasanjo said he learnt many lessons from Adedibu who he said would put any money given to him on the table and asked his followers to share it.

He said that was why his loyalists never left him at anytime. He said he would not fail to do anything he promised to do.