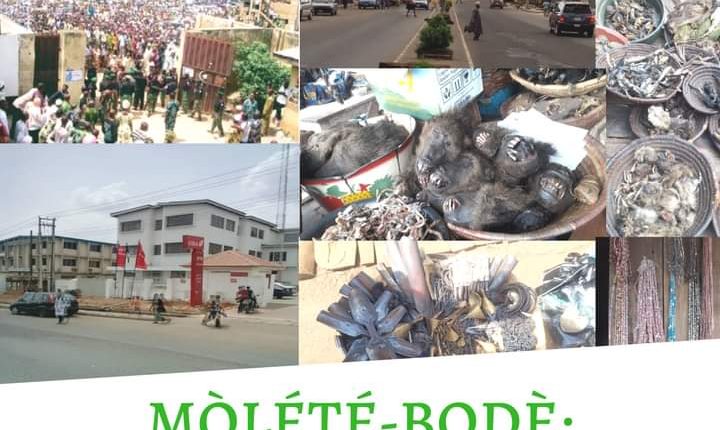 Historically, naming of location and areas evolved as a way to sort people into groups – by occupation, place of origin, clan affiliation, patronage, parentage, adoption, and even physical characteristics.

Molete, was said to have been a shortened form of “Omoletege” which was the description given to a mad woman, who used to inhabit a spot- around a now famous roundabout, over which a fly-over now runs. What was found interesting about her was her neatness. The mad woman’s rags were said to be uniquely neat and her environment and surroundings were always spotless and radiant. She washed daily and kept her environment beautifully clean, hence the name- “Omoletege” which later gave the area the name, Molete.

FIRST BUILDING IN MOLETE
Horatio built the first building at Molete, Horatio was the head of Ibadan Native Admin, he was also the national president of FUNAS, Federal Union of Native Administrative Staff while M.O Sowole of Isara was the Secretary and he also built his house across the olunloyo’s house in Molete.

Horatio Olunloyo was Christian who built the first house in Olunloyo residence in early year of 19th century only slept for one day in the house before he died in 1948.

Horatio was the most brilliant student of his set, a good record keeper as he was able to manage the record involved his office very well even in the reign of baale Oyewole FÒKÒ who governed Ibadan in 1924 to 1929 and he was the last Baale of Ibadan as Chief Abass Aleshinloye later became the first Olubadan of Ibadan land.

Molete in Ibadan can be overtly said as another business district of the city. This broad street is the seat of political structure of Adedibu dynasty.

A huge market, surrounded by further countless offices, shops and stalls makes up the entirety of Molete.

Molete would be counted amongst the top 5 most popular areas in the city of Ibadan.The fire brigade service point as flanged by not less than two big event centres, long time founded secondary schools and churches are places to note within the proximity.

ANNEXES AROUND MOLETE
There is no how you describe Molete without mentioning OkeAdo.
Oke-Ado was where the noveaux riches who arrived with independence lived, before the advent of Bodija Estate, which only came into being in 1958. Oke-Ado was the homes of Akin Deko, S.A Tinubu of Iresi, Justice Morgan, Chief Justice of the Western Region, who succeeded the Ghanaian QuarshieIdun as Chief Justice, Justice Olujide Somolu, who was Chief Awolowo’s best man in 1937, Daniel Olorunfemi Fagunwa on Ajanla street, Amos Tutuola, author of the Palm Wine Drinkard, the Otudekos, the Craigs, the Italian Construction firm of L. Dalberto, the home of popular textile trader and woman activist, Alhaja Humoani Alaga, built in 1951, Bola Babalakin, Ososami, Bola Ige, Chief Isamotu Ashiru, who built his first house in Oke-Ado in 1946, Victor and Wuraola Esan, Omololu Olunloyo, Duro Ogundiran and a host of others.

Victor Esan was one of Ibadan’s early lawyers, while his wife, Wuraola Esan was the founder of the People’s Girls’ Grammar School, Molete and Ibadan’s first woman senator.

Ibadan Grammar School was the first secondary school for Ibadan It was founded on 31st March 1913. Established as a Christian School in the best tradition of the Anglican Church, the Founder and first Principal of the school was Bishop (then Revd.) A. B Akinyele, a visionary clergyman who championed the cause of education, making great personal sacrifices, when western education was considered strange and unprofitable by the people.

Ibadan Grammar School started its journey as a leading Christian secondary school providing light in the darkness of heathenism and underdevelopment on 31st March, 1913 with twelve foundation students in a mud-built storey building owned by Mr. Samson Oke
and located at what was then Apampa Road at Alekuso, near Bere Square, Ibadan

St Anne’s School, Ibadan: The First Girls Secondary School In Nigeria
St. Anne’s School Molete , Ibadan is an amalgamation of two schools which were founded by the CMS mission for the education of the Girl child. CMS Girls Seminary, Lagos was founded in 1869 to provide secondary education for the Girl child. The 1870 prospectus of the school stated as its objective, the nurturing of “good wives, good mother and leading lights of society”.
In 1950, when the Broad Street, Lagos site of the school became too small for expansion, the CMS mission transferred the school to Ibadan and merged it with KUDETI GIRLS SCHOOL (founded 1899), another CMS mission school that was located in a vast forest area in Molete, Ibadan.

The new name of St. Anne’s School was then given to the School.From its inception in 1869 and 1899, it has indeed produced leading lights of Nigerian society from the North, East and West.
PRODUCTS OF ST ANNE’S SCHOOL MOLETE

There are thousands of people wjo have passes through the school such as
Professor (Mrs) Bolanle Awe (Nee Fajembola)
She is a woman with multiple career paths as a historian, an educator, a teacher, an administrator and a social advocate for women.

Yoruba Nation: Why I Won’t Back Down On Lagos Rally—Sunday…

JUST IN: Business Resumes Back In Shasha Market, As Makinde…

MOLETE AND POLITICS
Molete has history with Politics, Dr. Victor Omololu Olunloyo has his political and academic office at Molete, he was a former governor of Old Oyo State. His father, Horatio Olunloyo was Christian who built the first house in Olunloyo residence in early year of 19th century and his late mother Alhaja Bintu Tejumola Abebi Olunloyo who died October 2013 at 102-year- old.

Molete is the home of Late Chief Lamidi Ariyibi Akanji Adedibu. He was an aristocratic power broker in Oyo State, Nigeria. Former President Olusegun Obasanjo described him as the “father of the PDP”. Adedibu was born on October 24, 1927 at Oja-Oba, Ibadan, a member of the Olupoyi chieftaincy ruling house.

LANDMARKS
Molete has a long bridge, which aid vehicular movement and This peculiar bridge can also serves as mean of advertisement. Any billboard on it covers a dual lane traffic and it guarantees 100% visibility to both vehicular and human traffic and it is ideal for advertiser aspiring vast heterogeneous audience along this highly tolled route. Company’s brand placed on this billboard is sure to gain rapid publicity as this is one of the built of Molete.

Molete has a sister street and that is Bode.
Bode market. Lets call this place the “herb street” of Ibadan – where till kingdom comes indigenous items can never go out of stock. Pictures can tell how heavily the sales of earthen pots, beads, herbs and alot more go down there. This place depicts the real cores of ibadan as a whole.

Bode market is a very large market in Ibadan where women sell a number of products including groceries, food products, medicines, clothes and so on. According to the same source there are about 20 different associations in the market, but all the associations have the same executive council.

Entering into Bode, a charmy market will welcome you. At the sister street of Bode, you can find Agboile but in Bode you can find as many as possible. Agbole Oloya, Olode-asipa, Elega, Fanirungbontu, Asanpaowo, Okan, Abogun, Ile ibeji, Ile ounponmo, Gbodu; the great Raji Gbodu was a warrior in his life time and the families are Alfa now, Agbole Aperin, “Aperin omo olowofuja, omo aperin pefon, aperin kari ayaba”. Isale Bode has a boundary with Popoyemoja. Bode market is an herb market where you see varying degrees of herbs which are highly medicinal in value. Thus you will see Tagiri, iginla, ariwo, aworoso, kerewu, efun, o sun, ayu, muru, kanafuru,opele, etu, iyere, alamo, egusi aaye, atare.

TRADITIONAL RING(ÒRÙKA)
Yoruba believes that protection can be made through ring, òrùka. There are certain items a person can wear to keep themselves protected from evil spiritual entities, accident etc. Ide, bàbà, elélò, àdó-ide, funfun, dùdú, edan, edan wéwé, olómoge, oníkaàrìn. All these has peculiar benefits after certain condiment must have been added. Mastery- you command respect wherever you go;It can prevent road accidents,robbery,sickness,problems with law agents and physical attacks;It can make the law agents stay away from you;It can improve your luck, change bad luck to good luck;It gives you protection from evil spirit and enemies that are waiting to ambush/harm you;It gives you signs when something is about to happen.

GONGS(AGOGO)
Agogo is a single or multiple bell now used throughout the world but with origins in traditional Yoruba music. Thus they use traditional agogo like ide, ade orosa, oje, eley kan, dudu and many more. In Bode Oja, you will thousands of traditional products such as Seeni esu (devil’s chain), sékésekè, ifunpa and òbe èsù(devil’s knife).

The beauty of Mòlété-Bodè is a fantastic one as you can’t find the stocks of traditional herbs and condiments at large stock in any where in Ibadan than Bode Market. The Adepoju and Adedigba has the house on the road of Bode, Bola Odeleke,the first African woman to become a bishop is from Bode and her father Late Chief Aboderin house is situated beside Adepoju house.

Molete market is about the Molete Roundway which is one of the gateway to the Ibadan interiors. The market is a strip on both side of the bridge. Food are varied and moderately priced. Yam, plantain, fish, beef and many more.

You get to buy few things at quite a cheaper rate compare to some other locations in Ibadan . There is a reshape of the market since the government stopped the market men and women from selling under the bridge. You can link Molete market from any nearby location – like Oja Oba, Eyin Grammar, Challenge, Oke Ado etc.