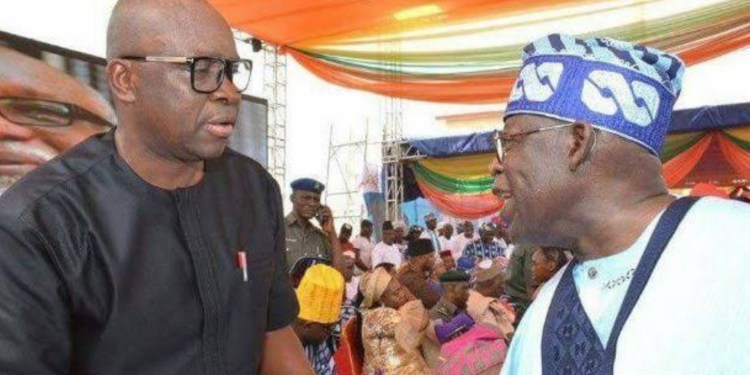 Adeleke, an ally of Governor Seyi Makinde, in a statement made available to newsmen on Tuesday stated this on the sideline of the deepening crisis rocking the Peoples Democratic Party in southwest.

The party has been in a deep power tussle over who calls the shot between Fayose and Makinde as the Southwest leader.

The statement by Adeleke read: “It takes a very disagreeable and kobnoxious fellow to be rejected by his own people. It takes a man taken to the highest level of perfidy to bask in the shamelessness of treachery.

It is only a man without an iota of integrity who would turn around to betray those who helped him rise to power.

“Indeed, Ayo Fayose’s fall from grace in his first outing as governor is traceable to all the inglorious behaviours stated above…no wonder, ex-president Olusegun Obasanjo called him the Prodigal of the South West and unfortunately, unlike the prodigal son who repented, Ayo Fayose is unrepentant and has become even more brazen in his recklessness because he suddenly has found himself as the utility room for some ‘big men’ who he has sold his dead conscience to once again. What happens in a utility room is that every junk is dumped there. Fayose has become the APC dustbin, subjugated and captured by some filthy lucre.

“Why won’t he be dancing naked in the market place when his trade from the beginning of time is begging and taking money to pursue his checkered political career? Who has not handed alms to Fayose? The Adelekes, the Adebutus and one thing was consistent, like the famed scorpion, he turned around to sting all of them and evilly sneer at them without any ting of conscience or remourse. A narcissist at best.
Who doesn’t know Ayo Fayose? A man who had the dishonour of being impeached as governor and whose people wholesomely rejected him after he crawled to power again through deciet, grovelling at the feet of men who forgave him and pulled him up again…yet again, he betrayed them.

“He may have met his match in his new ally, Bola Ahmed Tinubu, a man known for his whiles and cunny political ways, Fayose’s prodigious rigmarole may be finally checked but I would still advise the Asiwaju to watch his back. Fayose cannot be trusted.

“How such an unclean character fathoms that he can measure up to the shining light of the South West Zone, a man who has dignified himself all his life and has not stained his hands with dirt nor swim in murky waters of dishonesty and disgrace, a self made billionaire whose humility and service to his people are as glaring as the full moon, is indeed incomprehensible.

“Only a mind as devious and dense as that of Fayose cannot look in the mirror and see what the world sees…thuggery, treachery and blackmail.
Can we easily forget the undignifying images of Ayo Fayose rolling on the floor while staring in his own poor quality Nollywood movie or the images of a sitting governor, an otherwise respectable man bringing disrespect to the reverted position with neck braces and fake crocodile tears, splattering unequalled disgrace on the respected people of Ekiti across the world?
How can we forget his seeming devilry at storming the EFCC like a cowboy only to turn into a whimpering rat when it was obvious he was going to jail?

“Has the clown forgotten so soon that he began to sing in new tones and even praised Buhari who he had hitherto rained curses on without a care? Indeed the fear of EFCC was the beginning of ‘wisdom’ for Ayo Fayose who has never in his life imbibed any such word in his life.

“However the dishonoured Fayose chooses to deny his cowardice as if the records have been erased, how foolish! The whole world knows that Fayose’s latest alignment with Bola Tinubu is to deliver the South West to Asiwaju in 2023 in exchange for reprieve from his multiple cases of fraud in the EFCC. Notably, His Excellency Seyi Makinde, did not mention anybody’s name in his statement where he stressed the need to unite the party in the zone but it would seem, the guilty are afraid.

“Amusingly Fayose referred to Makinde as a political child. He has forgotten or in his reckless motor park tout manner of reasoning and speaking…the braggadocio of a rascal…that Makinde’s political career did not start yesterday. Makinde has been in politics for almost as long as Fayose has.

“It is on record that Seyi Makinde contested Seyi contested for Oyo South Senatorial seat under the All Nigeria Peoples Party (ANPP) in 2007.

“Makinde has never relented in shaping his political paths led by integrity. Unlike Fayose he was not doing so by ‘Do or Die’ tactics. He did not build an unruly army of violent thugs. He did not take to undignifying theatrics. He did not stab anyone in the back and most of all he built and won the trust of his people who willingly threw their weight behind him and made him governor in 2019 making him one of the most respected leaders of the zone, unlike Fayose who lives and rules by brute Force and thuggery.

“Unashamedly, Fayose true to character forgets that Seyi Makinde sponsored his last election but the ingrate that he is, he never appreciated the gesture through out his tenure. That is Fayose, a thorough traitor, a political Vulture.

“Without over stretching issues, the fact remains that Fayose is scum and a dishonourable character and therefore cannot speak for a people as egalitarian as the Yorubas of the South West.

“Of course, the shinning star of Nigeria cannot mix with scavengers like Fayose. He leads the entire party in the South West Zone. Seyi Makinde is too clean to have anything to do with Fayose.

“Today, Seyi Makinde is an iconic Nigerian, a well educated professional, a respected citizen of Nigeria, a man who has never disrespected nor insulted his parents unlike Fayose who has lived a life of infamy and brought his parents and family members to public disgrace with their dirty linen making headlines in major newspapers for years.

“The truth is that Seyi Makinde is the recognised leader of the South West PDP and there is nothing Fayose can do about it. GSM, Governor Seyi Makinde, (God’s Selected Man) will continue to lead the Zonal PDP towards peace and reconciliation and by God’s special grace, the zone will never fall under Fayose’s debauched plan to deliver us to the APC and his ally, Bola Tinubu in 2023, a pipedream that will be delivered empty. Enough of the nonsense.

Self-Confessed Rapists, Armed Robber who Asked The police To Kill Him, Has Escaped From Police Custody