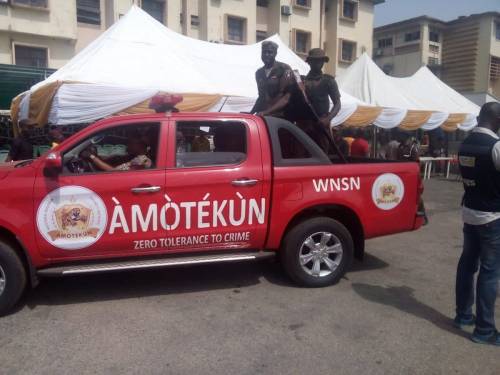 Habeeb Gbadebo, the 22-year-old younger brother of Akolade Gbadebo, a 400-level student of the University of Ibadan allegedly killed by Amotekun Corps officers in Oyo town, Oyo State, has said that the same officers threatened to also kill him for asking about his brother’s death.

Habeeb noted that contrary to claims by Amotekun, his brother was neither an armed robber nor a cult member.

He said this in an interview with PUNCH, adding that his brother was a peace-loving man. He said his brother was shot in the back by the officers who claimed it was the deceased who shot at them first.

Habeeb said, “My brother was a 400-level student of the Federal College of Education (Special), affiliated to the University of Ibadan.

“My brother was the gentle type who did not like trouble in any way. He never had any problem with the police or any law enforcement agency. He was a stammerer, so he found it hard to express himself and this probably contributed to his quietness. He was a peace-loving and gentle person.

“He was not an armed robber and he wasn’t a cult member. That is a lie and an attempt to cover up their crime. My brother was neither an armed robber nor a cultist. He was known to be a very quiet and honest person. You can find out from the area; don’t base your judgment on what I tell you.

“Anybody can find out from his school and his neighbours. He did not like staying out late and when he came to Ibadan to visit me, there was a time I was outside by 9pm and he was very angry with me. He threatened to report me to my dad that I had started going out at night.

“He was not a troublemaker and one of my neighbours who knew him when he came here has been weeping every morning because of this incident.”

Habeeb called on the government to bring those responsible for his brother’s death to justice.

He said, “What I find curious in the case is that they (Amotekun ) claimed he fired (a gunshot) at them; they said he faced them and opened fire on them; but how come he was shot in the back?

“He was shot in the back and he fell backwards; and did he remove his shirt and hold it also? There are many things that are strange to me. The Amotekun officer that we met at Iyaganku claimed in his statement that my brother shot at them immediately they got to the scene of the incident and they also fired back at him.

“It means that he faced them and fired at them as they claimed, but why did the bullet hit him in the back? How did he remove his shirt after he was shot and killed?

“We also went to Oyo to find out what happened. We wanted to know why they shot him and when we got there, the same set of Amotekun officers threatened to kill us. They pointed their guns at us and chased us away from there.”

Five Hoodlums Arrested By Police In Ibadan Over Attack On Residents