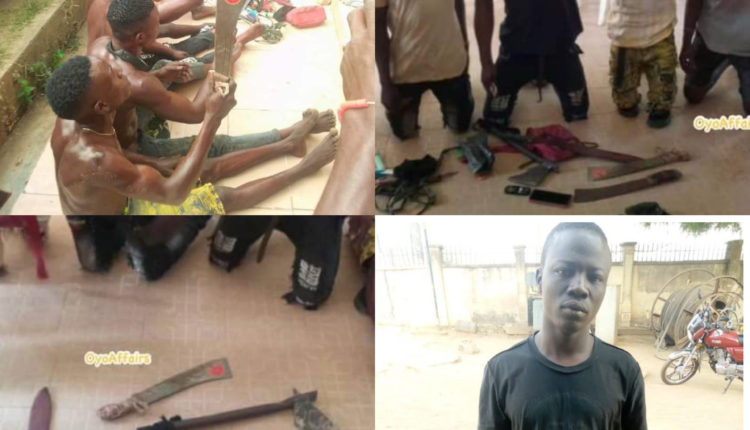 The Oyo State Security Network Agency, also known as Amotekun Corp has prevented planned mayhem by suspected hoodlums who have been terrorizing the pacesetter state.

Report has it that the hoodlums were caught while attacking some landlords in their premises as well as bricklayers at their working sites in the Afijio area of the state.

The hoodlums were reported to have demanded a huge sum from their victims and threatened to injure them before the Afijio Amotekun Corps busted the criminal elements and arrested them alongside some dangerous weapons with which they have been using to terrorize the people of Akinmorin and Alaaka Market.

Oyo to use Man O’ War operatives to secure primary,…

In a similar vein, a petty thief has been apprehended by the operatives of Oyo Amotekun last night while dispossessing an unsuspecting citizen of his mobile phone using a knife to threaten the victim.

As a result, the young boy caught in the act of petty theft was immediately arrested by the joint patrol of Oyo East and West Amotekun Corps and handed over to the Police at the Durbar Police Station in Oyo town.

Meanwhile, the Oyo state security network agency and Amotekun corps has warned the Apaara and Owode boys to stop acting deviant by unleashing mayhem on innocent residents of Oyo town all in the name of activism.

The Security network vowed not to stay idle while the gangs were destroying lives and properties.

Subsequently, the Corp read the riot act to the gangs, maintaining that it will send its scanners, scorpions, and pythons to bite any of the boys who disturb the peace of Oyo town henceforth.

Immigration Reunites Victim of Human Trafficking With Family After 14 Years