Side Chicks: American Stripper, Symba, Who Was Seen In A Photo With The Vice President Of Nigeria Spills Information 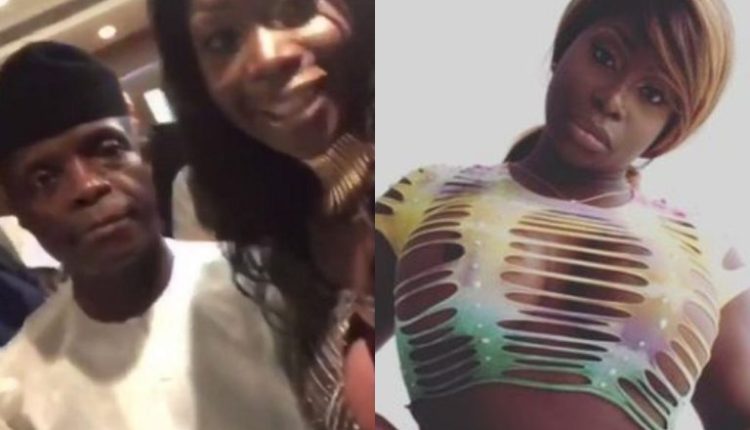 It’s just 2 days in the year 2021 and the secrets of top government officials and rich men in Nigeria have been brought to light by their alleged side chics.
On new years day, Africa’s richest man, Aliko Dangote’s alleged side chic revealed her romantic relationship with him and how it ended. In the series of posts she made on Instagram, the lady said being with Dangote is an unforgettable moment.

Her claims have been countered by another Instagram user who claims to have been with the rich man and even went ahead to share photos of herself with Dangote. She shared a photo of her chat notification showing a message from Dangote denying knowing the first side chic known as Bealewis.

While the matter is being processed on the street of social media, notorious American stripper, Symba has joined the fray with information on her alleged relationship with Vice President Osinbajo. The issue came up after their photo re-surfaced on the internet.

Unconfirmed report states that the stripper has been warming the bed of the Vice President since they met in 2018 at Eko Hotels w. his party, APC had an interaction with Entertainment Industry stakeholders. After the event, he took photos with everyone including Symba and sparked different views on social media.

Makinde Has Been The Most Supportive Of Security Agencies Among His Peers,Ask Buhari Why Security Architecture Has Failed—Oyo PDP Fires Back

Dangote Broke My Heart Into One Thpusand Pieces, Lady Laments.