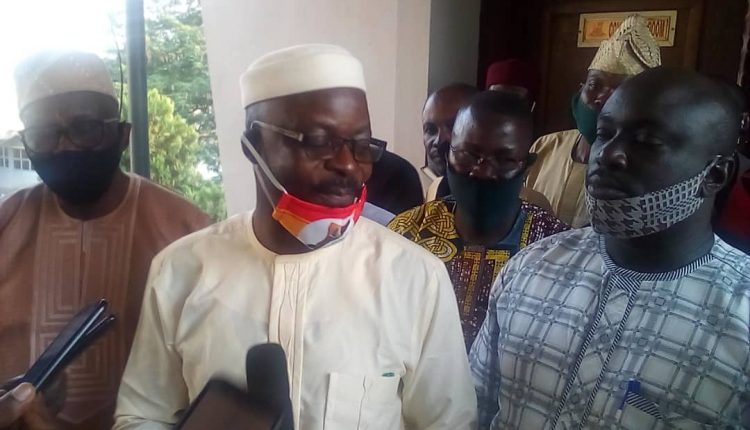 The Oyo state government has signed an agreement with governing councils and representatives of all tertiary institutions in the state for a new minimum wage effective from January 2020 in line with the federal government circular on minimum wage and National Salaries And Wages Commission.

The Oyo state Honourable Commissioner for Education, Science and Technology, Barrister Olasunkanmi Olaleye, in his brief remark shortly after signing the agreement at the event which took place at the conference room of the state ministry of education on Wednesday 13th January, 2021 maintained that the new development has finally laid to rest all forms of disagreements emanating from the new minimum wage in the state.

Recall that this Newspaper had earlier reported that Oyo state government through the Commissioner for education, Barr Olasunkanmi Olaleye, had berated action of Ibadan Polytechnic workers who embarked on indefinite strike on Monday 11th January following what was described by the government as ‘unjustifiable and baseless’.

Barr Olaleye argued that despite the state government entering into an agreement with all tertiary institutions in the state with regards to the new minimum wage which was in line with federal government circular as well as the national salaries and wages commission, the negotiating team of The Polytechnic of Ibadan wanted Oyo state government to adopt Lagos state structure which was a violation of the law leading to a disagreement.

According to earlier report, the commissioner had maintained that the state already had an existing agreement with governing councils and negotiating teams of all state owned tertiary institutions except the Polytechnic of Ibadan, an agreement said to be ready for signing anytime within the week.

The Polytechnic of Ibadan through the Registrar, Mrs. Modupe Theresa Fawale, who issued a statement few hours after the commissioner made government’s position known, urged the striking workers to return to work and gave room for further negotiations stressing factors which may affect both students and workers of the institution that would suffer as a result of the strike if prolonged.

Barrister Olaleye, who expressed excitement at the peaceful resolution after singing the agreement noted that governor Seyi Makinde is not just a leader but a listening leader with a very large heart adding that arrears of the new salaries have also been backdated to January 2020 by the governor when state civil servants started enjoying the new minimum wage.

“This is another landmark achievement for the administration of Governor Seyi Makinde and it is also a confirmation of his love workers in the state.

“Don’t forget that since last year, workers in the civil service have been enjoying the new minimum wage, now it is time for tertiary institutions in Oyo state. Actually, not even now, it will start from January 2020 because their arrears have been backdated by the Governor.

“It is indeed a confirmation of his love workers in Oyo state and we are very happy that the whole disagreement ended in joy for both the workers and the state government.” Barr Olaleye said.

If We Were in Military Regime, I would Have Fired LAUTECH…

The Chairman, Governing Council of The Polytechnic Ibadan, Professor Adekunle Akinyemi, while speaking with newsmen briefly after signing agreement for the new minimum wage, explained that the signing means a lot to the institution.

He said, “the agreement we just signed means a lot, I have been worried since we took over as the governing council of the institution as to why the civil service will be entitled to the new minimum wage and not the tertiary institutions.

“So, today is a landmark achievement in the administration of this government and it is a plus for them that they have levelled up with the civil service as tertiary institutions, now both of them can now enjoy the new minimum wage.”

Comrade Oyewumi said, “we want to appreciate His Excellency, the governor of the state, Engr Oluwaseyi Makinde, for giving a nod for this negotiation knowing fully well, that those in the state civil service don’t have two heads and we also don’t have half heads and by implication agreeing that this minimum wage will take proactive effect from 1st of January, 2020 irrespective of the time we are signing the agreement.

“Two sir, we want to put on note that based on the integrity of this government, we believe in the integrity of His Excellency, he is a man of his words and has always kept to his words, and by agreeing that in the next six months we are going to review this agreement.

He however, urged the state government to look into the burden of being overtaxed considering the economic reality across the world while maintaining that taxes are currently being negotiated in other parts of the world adding that workers in the education sector particularly the tertiary institutions are currently overtaxed by the state.

Earlier, the Commissioner for education, while addressing the stakeholders from all the state owned tertiary institutions commended all the negotiating teams team for their due diligence, maintaining that it was a long due process of negotiation that has eventually birthed a landmark success in the history of the state.

Barr Olaleye however, maintained that the new development has further justified and strengthened workers belief in this administration’s mantra from its inception as workers friendly stressing that all policies of the present administration is centred around the people adding that all the complaints received will be duly communicated to the executive governor.

Among other institutions present at the signing event are Adeseun Ogundoyin Polytechnic, Eruwa, Emmanuel Alayande College College Of Education, OSCATECH, and others. Others are Rector and Acting Rectors.