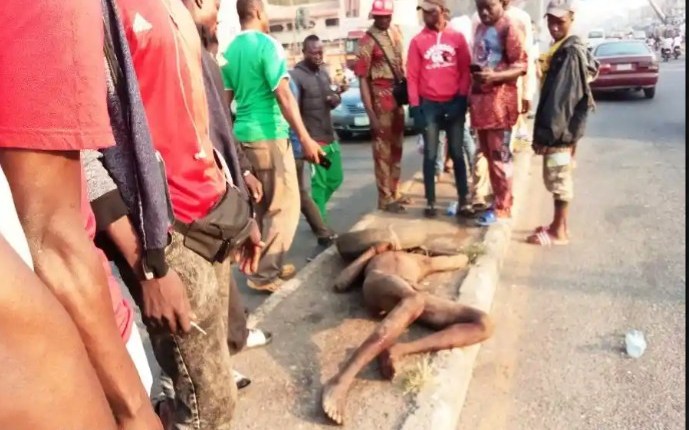 Angry mob around Oke-Itunu area of Ibadan have killed a suspected armed robber, who’s been suspected to be one of the theifs terorising the area for some period now.

The unfortunate incident which occured at rge early hours of friday arounf leventis junction had distrupt movement to and fro mokola-sango.

It was gathered that, young man suspected to be one of the armed robbers that visited the community early Friday morning was stripped naked and stoned to death by a mob at Leventis bus stop, before the arrival of men of the Nigeria Police.

Lifeless body of the suspected robber was left at the middle of the road after unsuccessful attempt to set the suspect ablaze attracted the attention of hundred of passers leading to temporary traffic along Sango-Mokola road.

When giving details of how the suspected robber was apprehended, Chief Saka Oladejo, the the chairman landlord association said two robbers came to the street but the vigilante group employed in the area were able to arrest one of them at 5 o clock in the morning while the other robber escaped.

He appealed to Oyo state government under governor Seyi Makinde to strengthen security in the area to forestall regular robbery attack.