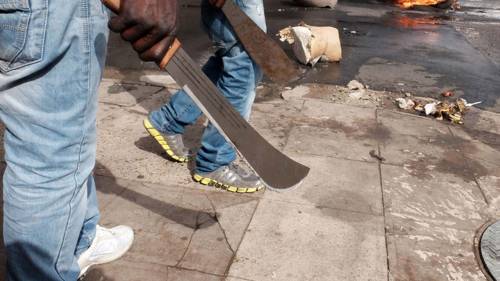 Residents and business owners around Leventis, Coca-Cola, Ajibade, Ajegunle and other closed by neighbourhood have flee for their lives as thugs launch attack in revenge of their gang member killed on friday.

Gang members of the victim of the mob attack at leventis bus stop had later return about 4:00pn heavily armed with dangerous weapons, shooting sporadically around the community.

It will be recalled that Todaysplash.com had earlier reported a case of jungle justice which resulted in the death of a robbery gang along Sango-Mokola road on friday.

On their arrival, the hoodlums were said to have shot sporadically and destroyed several properties in the area. Two people were said to have lost their lives as a result of gunshot injury during the incident.

Following the confusion that ensued, the majority of the shops in the area were shut with several houses deserted on Friday.

A shop owner at Ajibade who spoke on the condition of anonymity said that “the hoodlums, numbering about three on a commercial motorcycle stormed the area around 4pm and shot at two people. A man (name not known) and a woman simply identified as Toyin were shot during the confusion that ensued in the community.”

The eyewitness added that the residents fled the area for fear of being attacked by the hoodlums.

‌
He said, “It was so strange and frightening. At first, many people could not understand what was going on and the reason for the attack on the community. We were wondering; it was a terrible experience for us yesterday. They shot indiscriminately in every direction. At the end of the day, two people lost their lives while several others sustained varying degrees of injury.”

The PPRO said the police have dispatched some of its men to the area to forestall further attacks. He, however, said it was only one person that lost his life in the incident.

“The information I had indicated that some hoodlums in the area set ablaze a man suspected to be a thief on Thursday morning. Later, three men suspected to be cultists went on a reprisal attack and shot at the man named Ojo Jacob. The victim was about 58 years old. The hoodlums shot at him and bolted away.