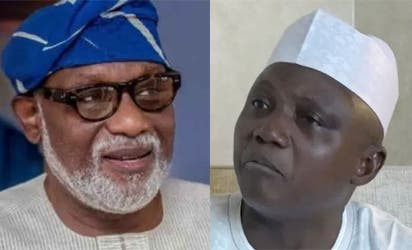 Ondo State government has said Garba Shehu, the Senior Special Assistant to the President on Media and Publicity should explain to Nigerians why he is taking up the fight of criminals masquerading as herdsmen to do evil in the state.

The state’s Commissioner for Information and Orientation, Donald Ojogo, made the call on a Channels TV programme monitored by Vanguard.

Recall that Todaysplash.com had reported how the government of Ondo State had issued a seven-day ultimatum for herdsmen to leave the state’s forest reserves, drawing reactions from various quarters.

But in a swift response to the Ultimatum, The Presidency, on Tuesday, issued a statement through Garba Shehu, stating that Governor Rotimi Akeredolu cannot tell herders to leave Ondo state.

However, reacting to Shehu’s statement, Ondo government said: “One thing is certain, President Muhammad Buhari, by his antecedent, nationalistic posture and the patriotism he is known for, may not have ordered that statement.”

In fact, Ojogo expressed doubt that Shehu issued the said statement “because it would have been a dangerous one for the unity of this country.”

“If true,” Ojogo said, “it would mean certain officials in the Presidency are actually out to create a problem for President Buhari. We must appreciate the effort of this President in his fight against insecurity across the country.

“If indeed he (Shehu) issued the statement, then Garba Shehu owes this nation a great deal of explanation to let people know why he must take up the fight of people masquerading as herdsmen to commit a crime.

“Ondo State government did not say herdsmen or the Fulani people should leave the state. That is not correct. It is those herdsmen who have occupied the forest reserves.

“These forests reserves are monuments and treasures of the people of the South-West. They have been earmarked for beauty and biodiversity; thousands of hectares of land.

“Some of these criminals elements have gone to mingle with the Fulani herdsmen who have occupied portions of these forest reserves as settlements.

“In any case, kidnap victims are taken into the deep forest reserves. And security agencies have enough evidence that these victims are taken there. So the government is trying to clear the mess by way of regulating the activities of herdsmen.

“And we should also know that it is not only Fulani people that are herdsmen. So I would be surprised if Miyetti Allah wants to appropriate the burden of criminality.”

On how to distinguish between criminal elements and peaceful dwellers, he said: “The governor’s directive is focused on forest reserves and not all forests, which would have been preposterous and ambiguous. But the governor was explicit and apt.

“These reserves have been converted to dens of kidnapping. In the narratives of kidnap victims lucky to regain freedom is this common trajectory. So what do you expect the government to do?

“The government was not elected to provide road and water only. The basic objective of the government and good governance is the security of lives and properties.

“This directive is not just in the interest of the people of Ondo State alone, but also in the interest of all residents including the Fulani. So it will be very suspicious if a particular ethnic group or some elements decide to appropriate this.