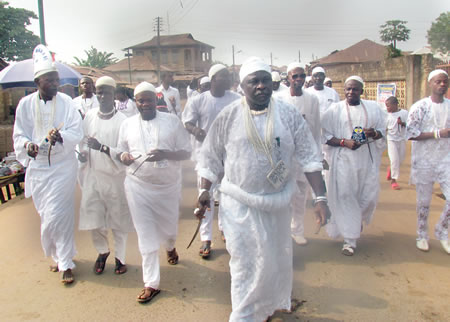 Todaysplash.com can report that after the forceful exit of Fulani herders from Igangan in Ibarapa North local government area of Oyo state by youths in the town, a mandatory curfew has been imposed by Oro worshippers.

The curfew, Vanguard gathered, will expire by 12 noon on Sunday.

Igangan Development Advocates (IDA), Mr Oladokun Oladiran, leader of the association, dismissed the claims that the festival was to ward off any reprisal attacks by the herders.

He explained that the Oro festival which usually lasts seven days began about six days ago.

During the festival, restriction of movement is enforced especially for women and non-indigenes of the town.

He said, “Things are quiet in Igangan as Oro festival curfew is now ongoing. It’s been on for some days now. Today (Saturday) is ‘Ahamo’, meaning stay indoors.

“All must be indoor. It has been on since the last seven days but today (Saturday) is the peak. All women will be indoors until around 12 noon tomorrow (Sunday).”

He said for the first time, residents of the town could now breathe a sigh of relief.

He noted that hundreds of people in Ibarapa would be eternally grateful to Sunday Igboho for coming to their rescue.

He said, “Year in the year, year out, several years under the continuous woes of Fulani banditry, Igangan’s hope of regaining their peace kept being dimmed until Friday, January 21, 2021, when the whole of Ibarapa land suddenly went agog with renewed strength of reclaiming their land.”

“The long-awaited sought and longed for a ray of hope for liberation glimmered in the form of Chief Sunday Adeyemo Igboho. Such a massive uproar might never have attended any saga in recent Ibarapa history.”

“It was not surprising, for not a single household in Ibarapa North-West LCDA could boast of unscathed life in the hand of the ever-terrorizing herders.

“For several years, farm plundering was their full-time business which grew audaciously in leaps and bounds even as the Seriki Saliu ensured that no Fulani was prosecuted even for offences they were caught pants down perpetrating.

With no disciplinary measures ever meted out to the now reverential Fulani herdsmen, their audacity has leapt in bounds from just grazing upon the sweats of Ibarapa farmers to maiming and lynching any farmer who dares raise a voice in deference to their destructive resolve.

“And as if it would never end, the era of heart-numbing fear that trickled into the very marrow of Igangan started years ago. Notorious Fulanis criminals increased spates of kidnappings and bloodshed upon the whole of Ibarapaland.”

“Coming on the heels of his ascension to a greater throne, Seriki Abdulkadri Saliu who was alleged to have deployed a regimen of some vicious Fulani to depose even a rival Seriki to further solidify his entrenchment and perpetuation in power.

“Having secured this supreme power, the beastly tendencies unleashed upon Ibarapaland took an alarming and heightened dimension as he kept harbouring and shielding all Fulani criminals.

“This ushered in an era of Fulani clans migrating into the vast fertile and lush lands of the indigenous people of Igangan and Ibarapa. They settled majestically on hijacked lands and even cultivated the lands with landownership authority.”

“It would needlessly infuriate Fulani herdsmen to see the indigenous people of Ibarapa still daring to cultivate their indigenous land. They often feel slighted and insulted by the insistence of the landowners on wanting to farm for their livelihood.

“So, in at least a week, a gory butchering of unsuspecting farmers perceived to by Fulani herders as a never-giving up impediment assumed an unchallenged normalcy.”

“Gradually, the people started losing counts of death tolls. Young and old kept being butchered; while the various sordid images of mutilated and dissected bodies form a nightmarish torment upon the people’s memories,” he concluded.