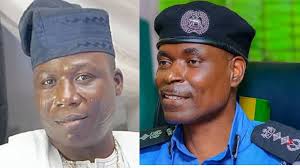 Onadeko in a statement by CSP. Fadeyi Olugbenga noted that the actions of Sunday Igboho led to the recent clashes between Fulani herdsmen in the area and the host community of Igangan. She however warned that nobody will be allowed to cause further breakdown of law and order while an investigation has been launched to determine details of the Igangan incident and bring perpetrators to justice.

“Following the fear of threats to public peace, occasioned by the inciting pronouncement of Chief Sunday Adeniyi, A.K.A Sunday Igboho, the Oyo State Police Command jointly with the Operation Burst had embarked on visibility/confidence building patrol of the areas concerned. “Sadly, the relative peace and calmness, being enjoyed, due to the visibility patrols of the Security Agencies were truncated by the visit of Sunday Igboho to Igangan, at about 1630hrs on 22nd January 2021. “The visit had culminated in a mob action by some youths in the town, who, armed with different types of weapons, embarked on arson and a breach of peace. In the process, grievous hurt was committed against one of the Police Officers, while discharging his statutory duties” the CP said.

It will be recalled that two people were allegedly killed following the violence that started in Igangan in the Ibarapa North Local Government Area of Oyo State on Friday when Sunday Igboho, reportedly stormed the Fulani settlement in the town to eject the Seriki Fulani, Salihu Abdukadir.

Igboho had last week issued a seven-day quit notice to the Seriki and his associates, accusing them of terrorizing and oppressing the residents, engaging in kidnapping as well as destroying their farmlands by allowing animals to graze on them. The matter has since gained national prominence, attracting various forms of comments from stakeholders. However, in handling the degenerating situation, the Oyo State Commissioner of Police noted stated further in the statement that “security operatives applied extreme caution to avoid casualty and to avoid the situation from degenerating to a complete breakdown of law and order.”

“The youths should avoid being used as pawns to ignite ethnic war. At no time has violence been used as weapon to address security challenges. “It is also necessary to mention that, substantial numbers of suspects (of different ethnic backgrounds) were arrested in connection with virtually all the cases of kidnapping or assassination, which had occurred in the State. “Some have been arraigned in the Court of Law and being remanded in Correctional Facilities, while investigations are still ongoing in some of the cases.

Investigation into the arson and the breach of the peace, which occurred at Igangan will be investigated to a logical conclusion and culprits shall be brought to justice.”