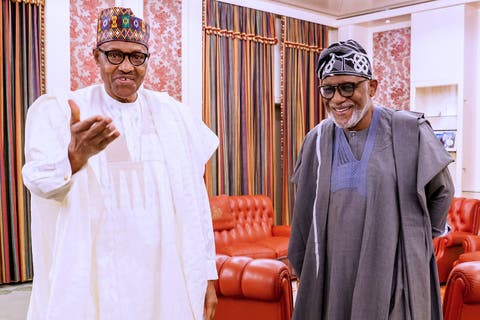 INSECURITY: Buhari Tells Akeredolu To Flush Out All Criminals In His State

PRESIDENT Muhammad Buhari, yesterday, asked Ondo State governor, Rotimi Akeredolu, to flush out all the criminals in his state, especially the forest reserves.

He also told the new service chiefs in a close doors meeting that the country was in a state of emergency.

Although the governor failed to grant State House correspondents an interview at the end of his close doors meeting with the President at Aso Rock in Abuja, his Information Commissioner, Donald Ojogo, disclosed the President’s call in a statement issued in Akure.

The statement read: “The governor seized the opportunity of the meeting to brief the President regarding the precarious security situation in the region, especially Ondo State.

“The governor met with the President at a meeting; and it centered on the issue of security concerns in the Southwest, especially in Ondo State.

“It was a huge opportunity for the governor to put the records straight as regards the erroneous impression that Governor Akeredolu had asked all Fulani and herdsmen to vacate the state.

“The meeting afforded both leaders a great window to explore ingenious methods to tackle the issue of insecurity in the region.

“In particular, Governor Akeredolu sought and, indeed, obtained the President’s support and encouragement to flush out criminals in the forests of Ondo State.”

The President also told the service chiefs that it has not been easy to fulfill the promises he made to Nigerians 2015 which were to secure the country, revive the economy, and fight corruption.

Admonishing the new service chiefs to be patriotic in discharging their duties, he also told them to serve the country well.

The President in a statement by his Special Adviser on Media and Publicity, Chief Femi Adesina, said: “We’re in a state of emergency. Be patriotic, serve the country well, as your loyalty is to the country.”

He congratulated the service chiefs on heading their various services, adding that “there’s nothing I can tell you about the service, because you are in it.

“I was also in it, and I will pray for you. I also assure you that whatever I can do as Commander-in-Chief will be done, so that the people will appreciate your efforts.

The President also charged the Service Chiefs to be concerned about the morale of their officers and men, saying they should be made to feel physically and professionally secure.

He pledged that Government would do its best in terms of equipment and logistics.

Buhari’s meeting with the new service chiefs at the Presidential Villa, was to strategise on the way forward for the nation’s security.

The President also had a meeting with Ondo State Governor, Oluwarotimi Akeredolu, SAN, his counterpart in Oyo State, Seyi Makinde, and the Ooni of Ife, His Imperial Majesty, Adeyeye Ogunwusi, Ojaja II, over the security situation in the South-West, especially in Ondo and Oyo states, with a call on Akeredolu to flush out all criminals in his state.

Vanguard learned that insurgency, banditry, kidnapping and other violent crimes nationwide topped the agenda at the meeting.

Recall that the President on Tuesday, announced appointment of the new service chiefs, following the groundswell of opposition that trailed the continued stay in office of their predecessors without commensurate improvement in security in the country.

President Buhari also met separately with the Oyo state governor over the tension generated by herdsmen attacks in his state.

He had met with the Ooni, Oba Ogunwusi, over the same insecurity problem in the South West on Tuesday night.