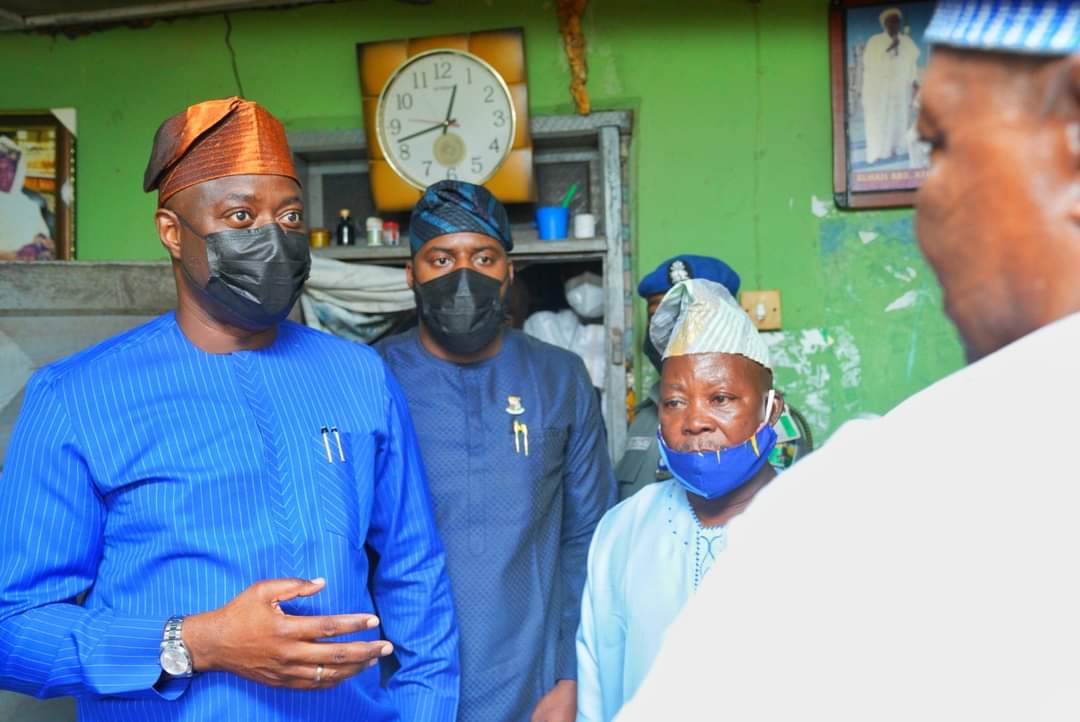 Makinde Declares War on Kidnappers, Criminals In Ibarapa And Oke-ogun.

Governor Seyi Makinde of Oyo State had declared war against kidnappers and other other criminal around Ibarapa and Oke-ogun axis.

The governor made this declaration on monday while meeting with stakeholder in Ibarapa, during a solidarity visit to the area, and as well to observe the situation of things and to discus the way forward on the security issues in the area

The governor used the opportunity to visit various spots in Ibarapa Land, to see for himself, the situation of things, he also later held a town hall meeting with the people and have an interactive session with the locales, where he promised that his administration will soon stamp out insecurity in the state.

He equally declared that the state could not afford to lose any more lives to insecurity, stating, however, that any action that must be taken must be guided by the realisation that a wrong solution must not be proffered in order to avoid unintended consequences.

A statement by the Chief Press Secretary to the governor, Mr. Taiwo Adisa, indicated that the governor stated these in Ibarapaland during meetings at Idere, Igangan and during visits to the homes of the late Dr. Fatai Aborode and others who lost their lives to the crisis in the area.

Governor Makinde, who equally commiserated with Mrs. Idowu Babarinde, who lost a child to indiscriminate shooting by kidnappers in their attempt to kidnap a filling station owner in Idere, said he was pained by the losses recorded in the area, adding that he felt the pain of the people of Ibarapa land.

“I decided to spend the night in Ibarapaland so as to let you know that if my people in this place cannot sleep with two eyes closed, I cannot also sleep with my two eyes closed in Ibadan,” the governor said, adding that the visit afforded him the opportunity of feeling the pains of the people first-hand.

He said: “We are turning the heat on the criminal elements and we will surely get them.”
He stated that the government will compensate victims of the insecurity situation in Ibarapaland, adding that measures that the government is taking to curtail the situation include the setting up of an all-inclusive peace and security committee at the local government levels and the stepping up intelligence gathering in the area.

According to him, “one of the things we want to do is, we must have a peace and security committee at the local government level, which will be all-encompassing. “Those people that are supposed to be there and can contribute meaningfully must be accommodated.

“So, I have listened to you. I came here purposely to sleep over to demonstrate that your problem is also my problem. If you cannot sleep with your two eyes closed, I also have no business sleeping with my two eyes closed in Ibadan.”

He further stated that the government will convene a meeting with traditional rulers in Ibarapaland in the next few days with a view to coming up with recommendations on the situation, warning that emergency situations as such should have been brought to the attention of the government long before it escalated.

Governor Makinde, who clarified that though he was misunderstood for the position he took during the crisis, he is not afraid to speak out but that he would not allow anyone to start ethnic war under his watch.

He added that the failure of communication, intelligence gathering and other factors led to the escalation of the crisis in the area and that though his government would take responsibility for some of the challenges, security challenges cannot be solved in one day.

The governor warned political office holders, community leaders and stakeholders in the area to treat emergency situations as sensitive and bring such to the attention of government on time, stating that claims that  letters were written to him were faulty.

He told political leaders of the area not to shy away from seeking audience with him wherever there is a gap that must be bridged.

He added that apart from the immediate deployment of 200 additional Amotekun Corps to Ibarapaland, he has also instructed that the agency and other security apparatuses step up on intelligence gathering, stating that the government will also fast-track its identity management policy so that it could know who lives where in the state.

The governor equally warned residents of the state not to stigmatise any particular ethnic group but to search out the real enemies who he said are the kidnappers, bandits, rapists, hoodlums and armed robbers.

At the home of the Aborodes, where the governor commiserated with the father of the late Aborode, Governor Makinde said: “I want to tell you that I feel your pain, because when I saw the news of the death of Dr. Fatai Aborode, I was seriously pained.

“In 2017, when we were striving to restructure the PDP, we started meetings and put some people in some local governments. Dr. Aborode was made the point man in Ibarapa North. I was at Ibadan in charge of Ibadan North-East and we did hold meetings at Premier Hotel. The situation is that if a tsetse fly perches on one’s private part, it requires wisdom to make it fly away or to kill it.

“Everybody is alleging that the Police are not giving us enough support while Amotekun and Operation Burst are really being supportive. But what the Constitution of the Federal Republic of Nigeria states is that whatever bothers on internal security should be handled by the Police.
“That is why some of us have said the federal control of Police is limiting their performance. That was why we requested for State Police and we know it is a constitutional issue.