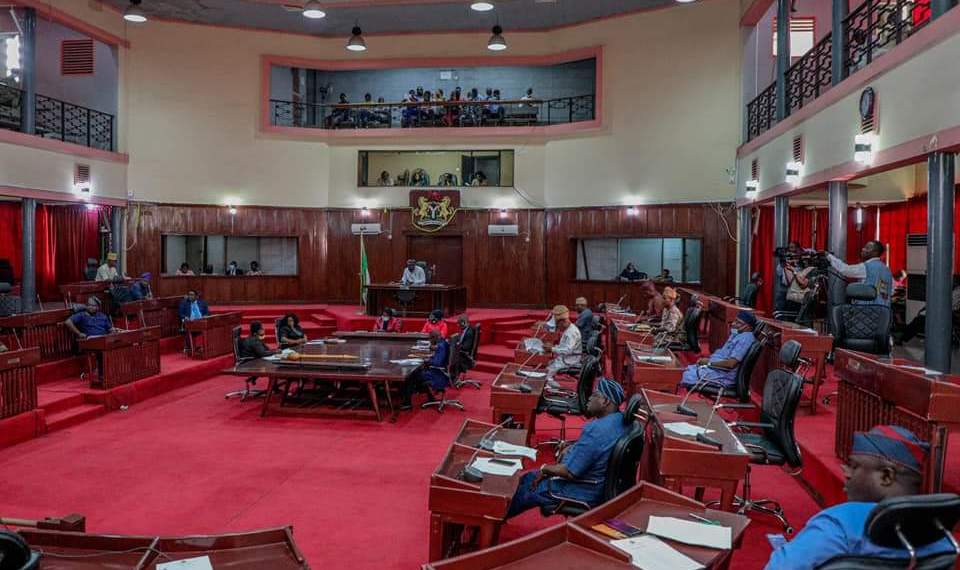 Members of the Oyo State House Assembly on Tuesday deliberate on the spate of insecurity in the state with the aim of proffering solution to it.

Oyo state is no doubt been battling with series of security issues in the state ranging from cult clash, Armed robbery in the city of Ibadan, Kidnapping, rape and herdsmen attack on farmers in Ibarapa/Oke-ogun axis.

According to the Nigerian Tribune, the. lawmakers decried an increase in killings, kidnappings, herders invasion of farms, crime and criminality in the state while contributing to a motion co-sponsored by Honourable Babajide Adebayo of Ibadan North II constituency and Honourable Tunde Isiaka of Oyo East/West constituency titled: “Stemming the Spike of Insecurity, Killings and Kidnappings in the state,” on Tuesday’s plenary.

Leading the litany of encounters, Honourable Hakeem Adedibu of Iwajowa constituency, recounted how he handed over the sum of N5.5million to kidnappers to secure the release of the Chairman of Iganna local council development area, Mr Jacob Adeleke who was kidnapped in October 2020.

He recalled that handed over the money to eight men who were armed with sophisticated weapons and took their time to count the N5.5million ransom before they released the kidnapped victim hidden in a bush between Kajola and Iwajowa.

Honourable Babalola Sunkanmi of Egbeda constituency narrated that the Babalola family had a troubled Christmas last year following the kidnap of one of them, Mrs Jumoke Babalola Oludele, on December 24, 2020.

He described as baffling the fact that the kidnappers kept communicating with the family for ransom with the same phone number yet the security agencies could not use technology to track them down.

Babalola noted that the kidnappers who received a ransom for his sister’s release were a combination of Fulani and Yoruba.

Rising to speak, Honourable Peter Ojedokun of Ibarapa North/Central said the people had to cry out to Sunday Igboho for help owing to rampant incidences of herders attack on farmers that went on unchecked.

He thanked Sunday Igboho for his intervention, noting that it came at a time when farmers in Ibarapaland could no longer go to their farms, women were constantly raped, people were macheted and daily lived in fear of the next attack.

Ojedokun described the open rearing and grazing regulation law as all-encompassing, praying that the executive arm gives force to implementation of the letters of the law in the state.

On his part, Honourable Oluwafowokanmi Oluwafemi of Ibadan South-West II constituency narrated how he had to run around in circles around Beere/Beyeruka to avoid cutlass-wielding hoodlums.

He said it had become expedient for the state governor, Seyi Makinde to be more decisive in dealing with hoodlums across the state.

In his contribution, Honourable Gbadamosi Saminu of Saki East/Atisbo constituency urged the state government to engage forest guards to safeguard the Old Oyo National Park from further infiltration by persons with criminal intents.

Speaking, Minority Leader, Honourable Asimiyu Alarape decried that the state governor had to improve upon efforts to tackle the security challenges bedevilling the state.

Noting that the criminals also dwelled among the people, Alarape urged residents of the state to give information to security agencies to enable them to be effective.

For Majority Leader, Honourable Sanjo Adedoyin, the state grappled with security challenges due to ineffective working relationship between the police and the state Security Network Corps (Amotekun).

He urged Governor Seyi Makinde to show courage in the battle against crime and criminality while charging security agents to force out criminal elements in the forest reserves and across the state.

Ruling on the motion, Speaker of the Assembly, Honourable Adebo Ogundoyin, urged the executive arm to constitute an Open Grazing Prohibition Task Force as part of implementing the state’s rearing and grazing regulation law.

Ogundoyin also charged lawmakers to stage security summits across the zones of the state so as to gather solutions to the insecurity that are peculiar to each zone.