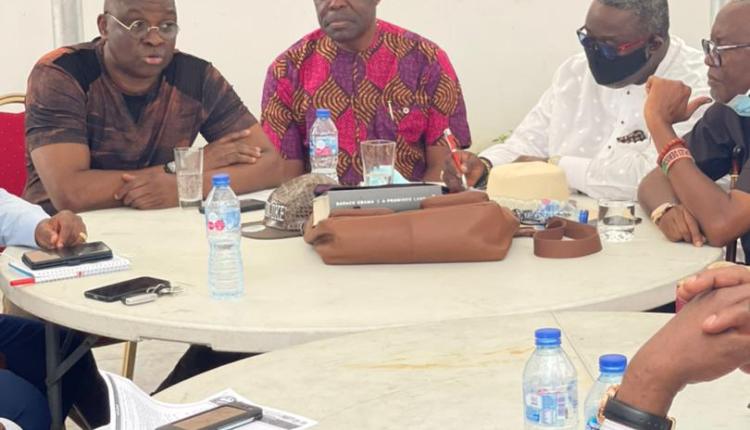 Present at tge meeting are the zonal chairmanship candidate Eddy Olafeso, four state chairmen and the zonal caretaker committee members of the zone and other prominent party leader.

Meanwhile the subject of duscussion in the meeting was not made public, it was gathered the meeting was conducted to evaluate the chances of Dr. Olafeso in the upcomming zonal congress.

The meeting also ressolved to hold an interactive session with some selected stakeholders in Ondo State tomorrow.

Also in the meeting were seven members of the zonal caretaker committee, including the Zonal Secretary, Hon. Daisi Akintan as well as the immediate past Zonal Secretary, who is also aspiring to return to the same position, Bunmi Jenyo.

Even though non of the members of Fayose group, who attended the closed door meeting was ready to divulge what was discussed, the Ogun State Chairman, who is also the chairman of the State chairmen, Dr. Sikirulai Ogundele, confirmed the Akure, Ondo State meeting.

He said “we the leaders of Fayose group are meeting Ondo State stakeholders tomorrow, Wednesday, January 10, 2021.”

He also condemned activities of former Osun State Governor, Prince Olagunsoye Oyinlola, saying he was profiting materially from the South-West crisis, advising him to live a life of a statesman