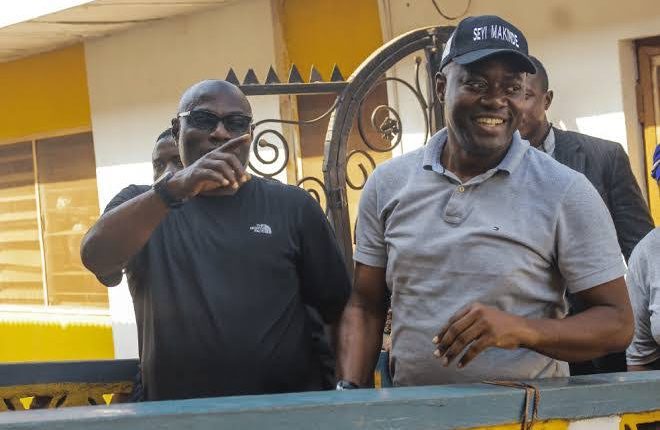 Ibadan Solidarity Vanguard and other Political groups in Oyo State have berated a Political chieftain of the People Democratic Party Oyo state, Alhaji Bisi Olopoeyan over his unruly behaviours towards the stakeholders In the party, the governor and Oyo state as a whole.

Olopoeyan who had over time criticized, condemned the governor and other stake holders of the party, has been warned to tread with caution and stop been a tool in the hands of those who know nothing about Oyo state Politics as at the end he will be rendered useless politically ..

The president of ibadan Solidarity movement Alhaji Bankole Oyewuwo had accused olopoeyan has been a political ‘Biggot’ who has nothing good to offer but selflish gains and cheap Political points against the present Government .. Let it be noted here that olopoeyan is just agitating for his greed and ambitious aims, his only been dissapointed for not getting excessive materialistic and monetary gains which we all know the Government will never adhered too …

Along these lines, it should also be known that he was compensated and rewarded bountifully for his endeavors during the prior election. He’s just emitting misplaced hatred because he was expecting something that doesn’t go in line with the conducts of this government that made the welfare and wellness of the masses it’s number one priority.

‘He who wants to war goodness should dig his own grave before venturing into the battle.’ That adage should be chanted aloud to Olopoeyan’s ears, lest he meets his waterloo at the end of the path he’s treading. He should stop being an axe in the hand of the haters of this government, because the horizon of it is nothing but doom and doom alone.

We’re All In This Together, Seyi Makinde Solidarise…

Moreover, everyone knows how much this administration craves for perfection in carrying out her duties and fulfilling it’s promises. It’s also not hidden that this administration goes extra miles to live up to the high expectations the masses have for it. So, it will never appoint a task or position to someone that doesn’t possess the right traits that are needed to fulfill it dutifully, no matter how much the person crave for it. That’s the reason Olopoeyan is venting his annoyance. He wants what everyone knows he’s not the right person to handle and manage. And it’s well known that whenever a house is built by a farmer, the collapse of the house in no time is certain.

Olopoeyan should be enjoined to retrace his steps, if he still wants his name to be on people’s lips and he wants his legacy to be etched on people’s minds. There’s no bright light at the end of the road when one forms an alliance with darkness to put out the light that brightens everyone’s day. He should willingly come back to the light where he used to be, where he deserved to be. Else, he will continue to fade with the darkness until there is nothing more for him in the political world.

Only the wise will change his way whenever he’s been told that the wrong way is what he treads. But the fool will turn deaf ears to people’s talks, and at the end only the wise will have a testimony to give, but the fool, he’ll be no where to be found. Now is the time to know where Olopoeyan belongs to. Now is the perfect time to know if he’s clothed with trappings of wisdom or the other way round.