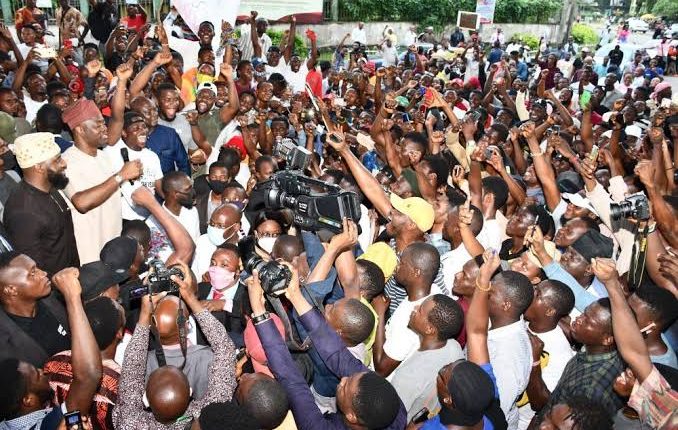 At the time there was an outburst, an outrage and mayhem being unleashed on the privileged people who had defaulted on their part of the social contract with the people, Makinde was unfazed: he stood tall among the people with unwavering confidence; and put out the embers of their fury like an accepted father would to an angry son. The #Endsars history would forever tag him as the Governor who appeased a riotous crowd while his kinds in office in other States scamper for, and with panicking withdrew into safety.

If not for anything, Makinde is richly known and renown for his populism. His populistic approach to governance is second to none as far as the country is concerned. Common people, common interest are largely the front burners in his government.

As his Twitter page reads, “Governor of Oyo State. Committed to redefining good governance with a focus on people-centred policies”, Makinde has shown in different facets that he is the Governor whose governance is centred on the needs of the people.

He has eased the financial constraint of the common man in sending his children to school by removing the previous levies, providing them free academic materials and environment conducive to their learning. He has redefined disability enlisting the disables in his government; mandating a compulsory inclusion of these people, at least one, in the governing process in their local government.

His populism was at its best when he cut down the salaries of his appointees without the touch on those of the civil servants. An act which shows a passion beyond words for the ordinary man. These are just few worthy of mentioning in the appeal to populism in his government.

Seyi Makinde, similarly, all encompassing attitude has given his government the tag of ” open government “. He has proven in many quarters he’s the Governor of everybody notwithstanding his partisan affiliation and political loyalty.

He has been fairly fair in his political appointment—a near-comprehensive representation of people across political parties and age group. Oyo state currently has one of the youngest minister in Nigeria.

Seun Fakorede, Oyo State minister of youth and sport, at 27, is the youngest commissioner in Nigeria’s history. Thanks to an tg encompassing approach to governance of the Mr Governor—S. Makinde.

In not so many words, the above describes Makinde as largely a democratic socialist—–one following the order of Obafemi Awolowo, the man who implanted the socialist persuasion on the Nigerian political philosophical thought.

Like his socialist predecessors greatest mistake, Makinde too opened style of government are failing to recognize in Machiavellian terms how necessary it is to be a fox to discover the snares and a lion to terrify the wolves.

In a nutshell, his appeal to populism has made him to be only loved but not feared. An effective leader should be one who is feared but not hated. However, it is better to be feared than loved, because love is unreliable as long as effective leadership is concerned.

24 In Apete, 10 In Lagos Arrested As EFCC Burst Fraud…

Send Your Letters To Bandits, Boko-Haram And Fulani…

In his bid to ride on the wings of popularity, he handles some flaring issues in the state with kid gloves and dangerous silence. He seems too careful not to step on toes.

One good case is the herdsmen’s crisis rocking the state which the governor’s reputation has been greeted with criticism on.

The perpetrators of evil are cashing in on the governor’s simplicity triggered by his populistic drive, and he himself tinkers for long before action or reaction are visited on them. Populist states are states opened to all form of vulnerabilities: these dangerous snares and wolves.

His Influence On His Party.

Seyi Makinde populistic drive has earned him popularity far and near of the state. He has also as a result been a blessing to his partisan badge—the PDP.

The party without doubt is currently enjoying some wide sense of popularity and acceptance from the people of Oyo State. Much thanks to the man who steers the course of activities in the state representing the party.

Similarly, PDP in Oyo state is relatively enjoying some leadership stability and unity unlike in some other States where vendetta and political manoeuvring are the order of the day.

Nonetheless some dust of criticism that have been raised to becloud his government, one pointing out in particular to his too opened fallible government, Seyi Makinde 2023 ambition is just as sound as the one that sprang him into power in 2019.

All things been equal, As long as he rides in continuity on his wing of populism, the one that saw him having the temerity to stand in the midst of a rampaging youth to pacify them, does not backfire; he’s certain to stay put as the Governor of the people in another run of gubernatorial race come 2023.

Makinde Gives Reason For Nominating Arapaja For PDP Zonal Chair And The Needs To Everyone To Rally Support For Him.