Pandemonium In Uniabuja As Students Beats Lecturer For Seizing Student’s Script During Exam. 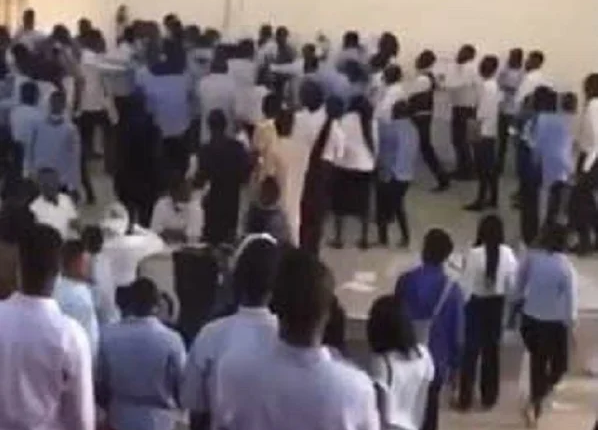 There was pandemoniun in Uniabuja as student descended on a lecturer for seizing studrnt’s scrip 45mins into a 3hours exam.

It was gathered that students got infruated by the lecturers cruel act of trying to make tge student fail the exam.

In a video making the rounds online, the lecturer was seen surrounded by students in black and white uniforms.

Social media users have started reacting to the video; while some supported the actions of the students, others out rightly condemned it.
A user, Zandravirginhair said, “As much as I don’t support them beating the lecturer, some lecturers are so insensitive.”

@Beibyvalentino stated, “These kids pay so much for this school and exams, most of them train themselves in school. They no beat you well sef.”

Another user, @Christmasjid wrote, “Let’s not support this action taken by these kids. Last week, a young girl went to school with a gun of this their same generation. Last week I heard a young man too shot a friend (teenager). So what this is telling us now is that going forward we have all failed as parents to train our kids well. This generation is completely out of hand with no moral values. Lecturers did worse in our time but we never resulted to this kind of action.”

Oyo PDP Sets Up Screening And Appeal Committee, Ahead Of The Party’s Primaries For LG Polls