Political Parties And Active Youth Participation: A Case For The S’oro S’oke Generation, An Excerpt From Oyo APC Youths Summit 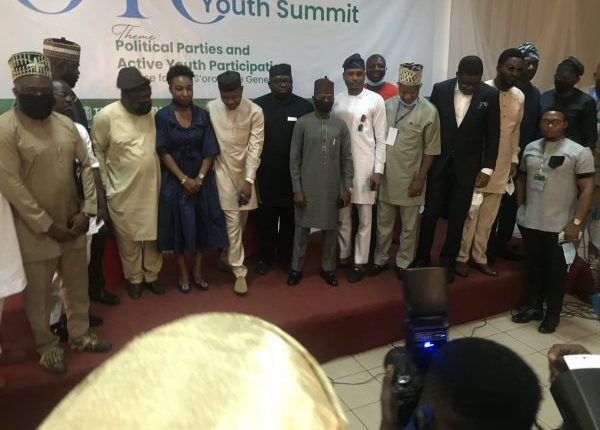 The Oyo State APC Youths Across the State held a Progressives Youth Summit with the Theme “Political Parties and Active Youth Participation: A Case for the S’oro S’oke Generation” in Ibadan today the 25th of February 2021.

Hon Afeez Bolaji Replete who Spoke in the program, express his satisfaction by the youths who deem it fit to Organize such wonderful summit, he preach peace, Unity.

Repete who in his address also shades the Oyo State Governor Seyi Makinde, Look amused, “Makinde Administration is confused “Saying First it was Maize now it’s Cassava which of this should the masses believe?”

He went on to say the good people of Oyo state can’t wait to have APC back at the Agodi Secretariat, Channeling the State affairs, because the best time this state has experience peace, good Security, Progressive in all sectors, has been under the Administration of the former Governor now late Sen Abiola Ajimobi.

He further talked about how people in the state now live with fear, as their lives are no more safe in their own land, yet we have a state Governor who Claimed to be in charge, it’s time to take back Power, we can only do that if we are United he Said.

The APC Gubernatorial Candidate in the 2019 general elections, Oloye Bayo Adelabu in his words said the youths needs to identify themselves and make themselves relevant to be reckoned with in the Political sphere.

He went on to fault the state government for the Security lapses in the State, “I was a chairman Security Trust fund for 3years, I’ve the template which the former Governor Abiola Ajimobi use to governern the Security issues in the state” he said.

why dismantling a template that work fine? why you can’t you continue from there? must everything be politices? he ask rhetorically

Adelabu Also call for more youths inclusiveness in governance, and charge the Organisers to ensure the continuity of the program as it’s a pointer that APC Youths are getting it Right… Owing to the S’oro S’oke Nomenclature.

Keynote speaker Abel Dorathy Ossai, who speak extensively about the S’oro S’oke Nomenclature, said it was a ground debute of pushing the Nigerian youths into the Political sphere.

It’s shows that the youths now want to speak up, over maginalisation in the polity, which makes them suffer so much because they are not in the decision making echelon of this country.

She’s asked how serious the Youths are?

what do the Youths really want?

She said the ‘Will’ Of the S’oro S’oke Generation is to place the youths at the top and portray us as a good light and not the ones who think Nigeria is dead, all that is needed is just to burry it.

The S’oro S’oke are youths on a mission to make their life peaceful, Prosperous and assendance to high international recognition.

History will Recall how in October 2020 Nigerian youths stage a massive protest that cut accros the country, fighting against the police reform, SARS Brutality and many more.

The measure of our seriousness in a protest can’t quantify what we want as a Youth, and as such we need to be involved in decision making to better our lives in Healthcare reforms, Quality Education and many more.

Senator Fatai Buhari in his address admonise the Youths and the Organisers of the program, saying it shows the youth are ready to demonstrate and not just site down at the corridors of their home while shouting the S’oro S’oke Nomenclature.

He said power is not giving but can be taken if there’s a Will’, zeal and passion to drive the goal. Only those who prepare will grab an opportunity when it comes, every youths here present need to think inwards and reorientate themselves, reorientation is key to success because the dynamics change every now and then.

A chat by this Newspaper to one of the Organisers and a leader of the APC in the State Abiola Oyeyemi Popular known as Olubadan, Said this summit is to help enlighten the youths to know more, and to be used in the right direction, instead of them to be used as a tool in the hands of some leaders to acquire more powers, while they’re being neglected to their faith.

He further noted that the Youths accros the state needs to be a rallying point of all leaders without sectionalism, all youths need to be seen as one, speak in one voice, Unity, as Progress is surely a general target.

Asiwaju Folawiyo who also Speaks on the theme of the summit said, it’s high time Youths Participate in every section and processes of the Political Parties they belong to, he asked ‘ while will the youths be subjected to only the Positions of party Youth leaders? in most cases this youths ain’t Youths in the First place.

Hon Saheed Akinade fijabi who also speak as a panelists spoke estensively about the lack of Political will,and support of the youths to themselves. he use himself as a case study and said the Youths should all look inwards and reorientate ourselves.

The Organisers were praise for a job well done, and were asked to ensure that the summit isn’t just a one time program but should be done quarterly, Adelabu Labzy who later announced the date for the next meeting said after much Consultation by the stakeholders May 7th 2021 has been picked for the next program.

Recall that since 2019 election, this will be the first meeting the youths will organized in the State.