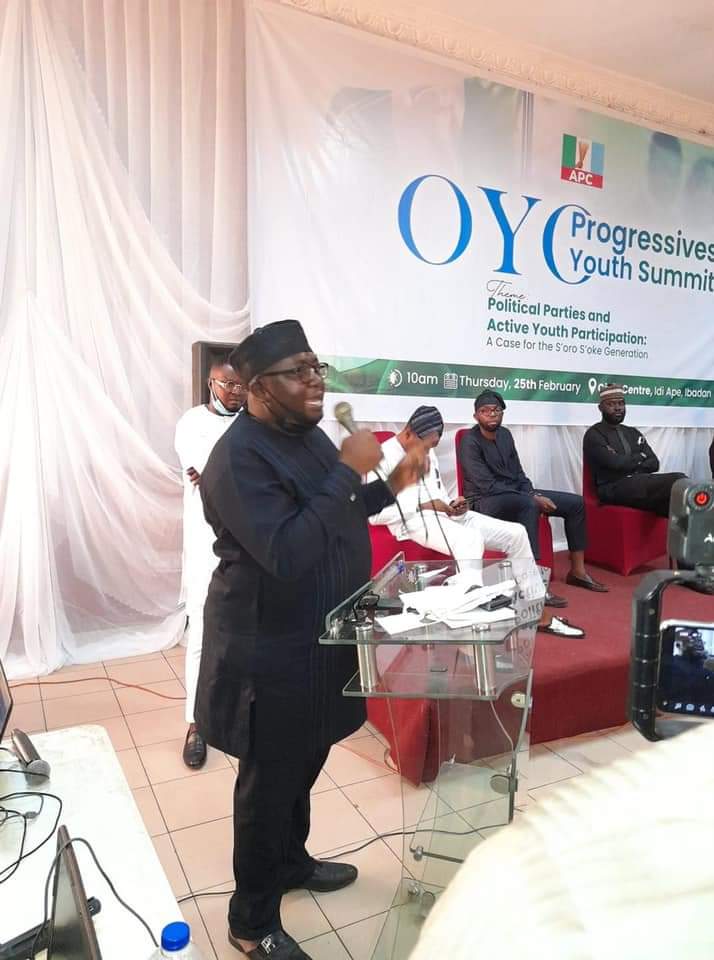 The Oyo APC Gubernatorial candidate in the 2019 general elections, Oloye Bayo Adelabu has faulted Oyo State Governor Engr Seyi Makinde Over the handling of Security of lives and properties in the state, Saying Makinde has no local intelligence to handle Security Issues in the State.

Oloye Bayo Adelabu said this at the Progressives Youth Summit Organized by APC Youths, In Ibadan on Thursday monitored by this Newspaper.

Adelabu who said that Oyo State Governor met a working template on Security on ground by the former Governor of Oyo State Sen Abiola Ajimobi, but refuse to used it, and also failed to call people who understands the Security templates to put him through.

He said we can’t be everything at a time, this is the major reasons he Makinde should have employed competent hands on Security, because no economy will grow with the spate of insecurities in the State.

The last Administration was able to ensure that lives and properties are safe for years, that was why the owners of Hilltop Hotels, Owu Crowns,Western baylse, and many other businesses spring up in the state.

“If people come from Lagos every weekend and spend a night in an hotel for 100k and you have 10,000 of such customers, if you multiple that amount by 52 weeks, That’s over N5billion , such company is contributing direct to the Economic growth of the State per annum.

But when the Security of the state is porous, how do you expect an investor to invest in the state? It’s a pointer that the state governor Engr Seyi Makinde is not abreast of the situation.

I was the chairman Oyo State Security Trust fund for 3year, I know and I’ve the template used by my leader former Governor of Oyo State, Abiola Ajimobi.

While will someone decide to dismantle a working template that works perfectly well all in the name of politics? he asked. must we play politics even with the lives of those we govern?

If he Makinde has a business in Oyo State, maybe he would have known the pain the masses, everyone inclusive is going through right now.

Adelabu also commensurate with the families who lost Love ones, businesses owned to the Failure of the governor to ensure proper security of lives and properties in the State.

The good people of Oyo State has seen how incompetent Makinde is, they now understand better, come 2023 they won’t repeat such mistakes in electing a failed government in power again.

Out people will choose peace, Security of lives and properties, infrastructural development, over someone who have failed them and make them lost their loved ones, and source of livelihood because of his incompetence, he said.