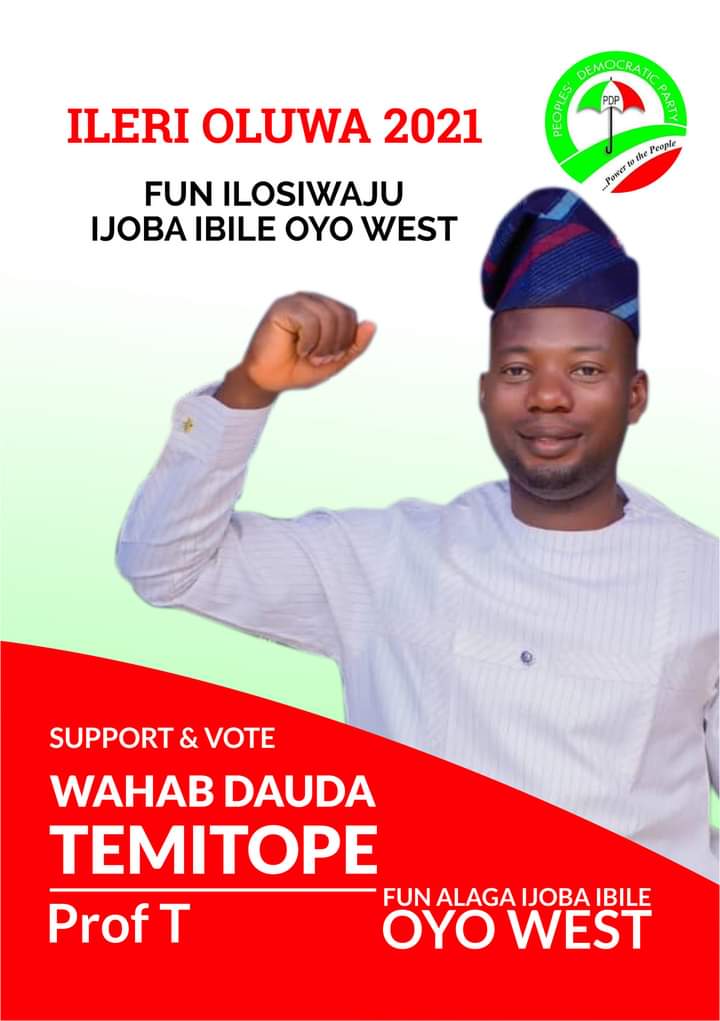 A leader is best known when people barely know he exists, when his work is done, his aim is fulfilled and seeing into the development of the larger society. Where there is no vision, the people perish. But where our vision is disentangled, it leads to a very productive result bringing all sorts of transformation in all facets of our political life.

In a bid to restructuring the effective governance in Oyo West local government as the Oyo State Local Government Election is fast approaching, Com Wahab Dauda Temitope has flagged off his chairmanship ambition with a view to ensuring the manifestations of his cardinal plans to move Oyo West local government forward in the area of effective governance.Com Wahab Daud Temitope is the youngest candidate and the most popular among other aspirants, he is the former Student Union Scribe.
An intelligentsia of high note and the ardent member of GSM Movement in the local government from the inception. He has toured all the ten wards in the local government highlighting his blue prints to the teeming members of the party and the people of the local government with an all inclusive packages.
Com Wahab Dauda Temitope cannot be likened to some ageing leaders who are on their political oblivion, Some of whom are the incumbent and former party chairmen for two years in the same local government. They have been in the caretaker government for almost 15 months without anything to show for it, For almost three and a half years
in public office without any reasonable development.

Immediately they found themselves at the foyer of power as the party chairman, they started floating around a political group with personal aggrandizement where party largesse were diverted to suit their selfish interests. As if that is just enough, they always at loggerheads with the leaders of the local government through their selfish way of selling the government assets and properties to enrich their personal pockets.

It’s very laughable, pitiable and even petty for some leaders who are still in the office in this 21st century of modern politics waiting to be picked by the party’s leaders while the personal antecedents should have been a yardstick speaking for them to try their political popularities.

While we remain resolute to see the truth from lies, seeing the right from the wrong with our unrelenting efforts to support the developmental agenda we so desire in our local government. After critical observation and analysis of all these ageing contenders, we would know that in effecting the good governance in our local government, Com Wahab Dauda Temitope is the right man for the job ahead.