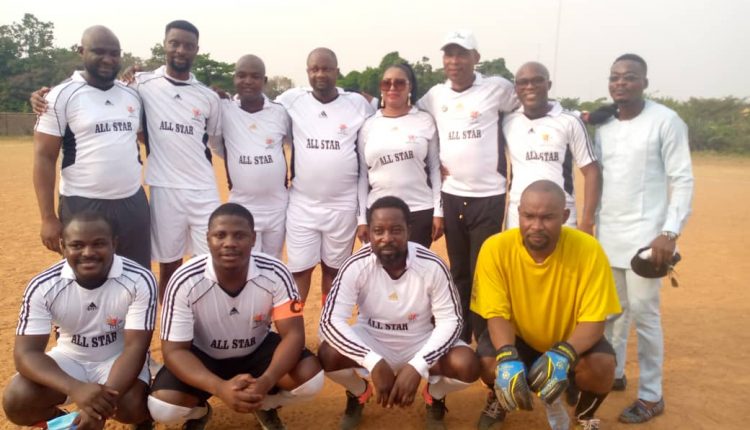 A novelty match Organized by a non-governmental organisation ‘Friends Of Deji Ola’ which was one of its social programs designed to further alliviate and change the narratives was graced by top dignitaries from all works of life and diverse sectors of the country.

Dignitaries from different sphere of life such as Politicians, business men and women, bankers with class and humanitarian organisations were on ground to associate with FOD organisation on it’s first ever novelty match held at the University Teaching Hospital pitch, UCH Ibadan.

The event was a mouth-wetering one,as it was also designed to mark the birthday of the Convener of “Friends Of Deji Ola” Deji Ola himself.

The first goal was scored by the Hon. Commissioner for Youths and Sport Asiwaju Seun Fakorede in a dramatic penalty shoot-out, which he took twice before finding the back of the net, he missed the first and the referee caution the FOD goalkeeper for stepping over his lines, guess who the goalkeeper was? Fako as he’s foundly called, calmly sloted it to the top right corner of the net, and the All Stars took the lead, at just 5mins into the match.

The first half ended with a 1-1 appease, with a goal each from Asiwaju Seun Fakorede from the All Stars side, and Agbaakin Akinwale from the Friends Of Deji Ola side.

The match which later ended 2-1 in favor of the All stars side, with a dramatic wining goal from Hon. Mrs. Toyin Balogun, the goal which can be related to the famous Late maradona (Hand Of God) goal, saw Hon. Mrs Toyin Balogun took a pass from Raji Korede from the center half, dribble past 9 opponent before taking a thunderous shot with her hand, which was just too much for the FOD goalkeeper to handle, It was a goal the FOD Team won’t forget in a hurry. At 90th minute there was nothing the FOD players could do to redeem their Image, rather they resulted in a hard tackle tactics, which saw two of their players redcarded in the match.

Players from both side were awarded with certificate of participation, while the honorable Commissioner for Youths and Sports Asiwaju Seun Fakorede went home with the player of the tournament.

JUST IN: House Of Reps Loses Another Member

The Convener of Friends Of Deji Ola’ Appreciate everyone for honoring FOD, taking time out of their busy schedule to make it up from their respective place to the venue, despite being on an Owambe Saturday.

He said the question has always been, how far have we been able to change the narratives in a positive way? with this in mind our best can never be enough, this has been the drive, we believe that our leaders can’t do it all, it’s just a way to help fill the vacuum.

“I want to thank His Excellency Engr Seyi Makinde, the Executive Governor of Oyo State, for giving us an enabling environment to operate, without this we might not be able to touch lives as mich as we’ve done”.

” I want to Emphasize that FOD is a non-governmental organisation with a mandate to always create value, touch lives and raised great minds”.

Today we want to lunch the (IIC) Idea Incubation Center, This Will help the youths have an enabling environment were ideas can be generated, seived and incubated before transforming it to a working System, that will further create opportunities for everyone.

We hereby seek support from all meaningful persons who have embraced this project so that our Youths can have a Center where their dreams can be achieved. A vocational Center will also be situated at the (IIC) Idea Incubation Center, where youths can learn different Handwork that will help them from being idle.
Different donations were made in Support of the Idea Incubation Center (IIc).