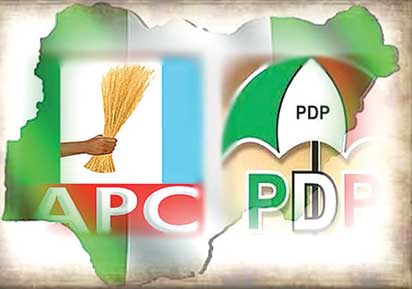 The ruling All Progressives Congress APC has slammed the Peoples Democratic Party PDP for its lame attempt at returning to power in 2023, describing the opposition party’s ambition as ‘incredibly delusional’.

The statement reads; “The All Progressives Congress (APC) has no intention to trade words with the Peoples Democratic Party (PDP), its governors and leaders on the propriety of infrastructure projects undertaken by the current administration and which state deserves a federal government project.

“From previously abandoned to new projects, under the President Muhammadu Buhari-led APC administration, every state of the federation, including the Federal Capital Territory (FCT) has an ongoing and major federal road and other critical infrastructure project. This is a fact and it is verifiable.

“Following the gale of defections that has hit the PDP since the advent of the Governor Mai Mala Buni-led APC Caretaker/Extraordinary Convention Planning Committee (CECPC), we hear the PDP is doing all it can and begging its members and leaders to remain in the PDP. We wish the PDP goodluck in its futile and desperate attempts.

“Again, the APC laughs at the PDP’s meaningless comparison with the current administration and the early 2023 presidential campaigns of some PDP governors. Our focus is delivering on our popular mandate and multi-facet Next Level agenda for the country. For one, the President Buhari administration is implementing one of the world’s largest and wide-ranging social investment programme which is benefitting the vulnerable and has taken many Nigerians out of poverty. Commendably, we are well on course to delivering other aspects of the Next Level agenda.

“The PDP is apparently deluding itself that its desperate cravings to return to power at the centre amounts to the wishes of Nigerians. This is incredibly delusional. It is important to remind the PDP that in a democracy and progressive politics, power is not “taken” but given through a popular mandate by the people. The current state of the PDP does not show the failed opposition party is anywhere close to earning such mandate from the electorate.”

LG Election: Despite Pocket Of Violence And Controversy, Ningi Committee Certifies Oyo LG Primaries To Be Free, Fair And Credible