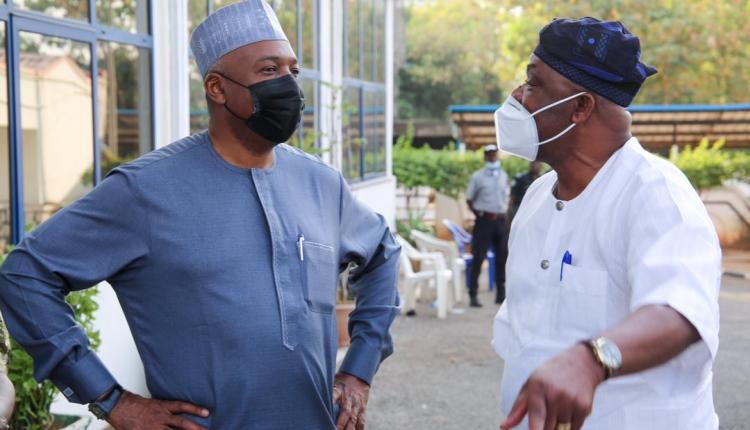 The Dr Bukola Saraki led reconciliation committee of the People’s Democratic Party has today, 10th march,  Met with the former and now Aspirant of the PDP South-west zonal Chairmanship Chief Eddy Olafeso and other Party faithfuls in Abuja.

The southwest zonal chapter of the party have been routle with various degrees of Conflicts, intra-party crisis between the Ayyo Fayose and Governor Seyi Makinde camp over the return of Dr. Eddy Olafeso as the party’s chairman in the zone

Olafeso from the former governor of Ekiti state camp is going to be facing Amb. Taofeek Arapaja from the Gov. Seyi Makinde’s camp in the upcoming party zonal congress.

Sources Said the meeting is connected to the forthcoming South-west zonal Congress, which Senator Bukola Saraki has promised to settle the rift between Ayodele Fayose and Seyi Makinde.

Though Details of the meeting is yet to be asertained as at the time of filling this report, sources said it’s towards a smooth south West Zonal Congress.

Dr. Bukola Saraki who has been saddled with the responsibility of ensuring peace and unity within stakeholders in the party, before 2023 politiking have been meeting with various leaders of the party across the country to instill peace.