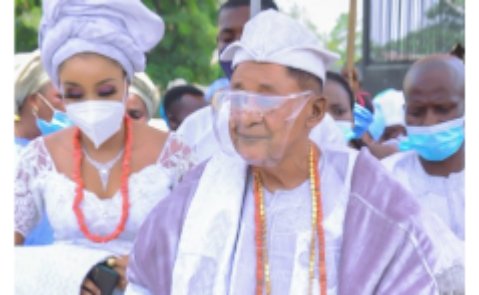 The Paramount Ruler of Yoruba land, Oba Lamidi Adeyemi, The Alaafin Of Oyo, Iku Baba Yeye himself have left many in a state of confusion as he goes public with a new woman by name Chioma.

The mornach who honored the invitation of the Aare onikoyi of Yoruba land, Chief Tomori Williams last weekend  was seen entering the event with a young lady on his left hand side with seeming closeness beyond ordinary.

Kabiyesi who looked younger and smart walked in with his 13 Queens who were looking so beautiful in white lace matched with white headgear and the newest wife, Olori Chioma Adeyemi. She is also very fair and she is so pretty too.

She stayed at the left-hand side of kabiyesi as he walked in. Though many didn’t know who she was as her face wasn’t one of the regular young Oloris at the palace.

Sowore, Four Others Remanded in Kuje over Three Count…

First among many rich celebrity men who made the event was His Royal Majesty, Alayeluwa Oba Dr Saheed Ademola Ifawuyi Elegushi, the ruler of Ikate kingdom, his close friend, Akinsiku of Lagos, Olofa of Offa land, Oba Alara of Ilara, Oba Apomu & 13 other Oba’s storm Oyo for Otunba Tomori Williams, the Aare Onikoyi of Yorubaland.
According to Kabiyesi in an interview, he granted many months ago, his words “I did not propose to any of my wives. They desired to be with me because I sent them to school. After their university education, I told them to leave but they refused and insisted on staying with me here in the palace as my wives. The least educated of them has a Higher National Diploma and is now in the University. I don’t begrudge or offend women. Marriage is an institution that must be defended.”

“Each partner has a role to play in the marriage. My wives have their individual quarters. God has given me some type of ability and grace to keep a woman, especially beautiful women. I don’t disclose my conversations or activities with one wife to another”.

“I maintain a strict code of confidentiality. I have learnt that I must positively make an impact on people and make a great first impression. Of course, they (wives) sometimes have disagreements and conflicts of opinion but I have been ‘graced’ by God to know how to ensure that the conflicts don’t escalate,” said Alaafin of Oyo.

The event which sent the whole of Oyo town agog also paraded many super-rich Lagos Big boys who had been in Oyo town a day before the event to honour the Lagos Real Estate giant who is also the custodian of Ooto Lands.