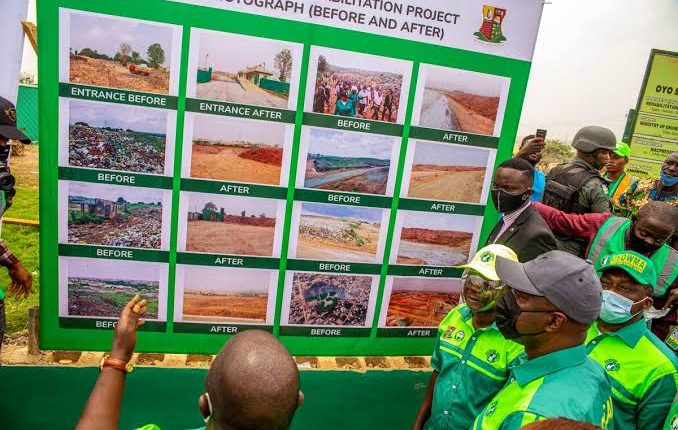 On January 1, 2012, the Sunday Tribune featured an article with the title “Awotan (Apete): Agony of a dumpsite neighbourhood.” It was a narrative of the pains and agonizing experience of people living around the popular Awotan dumpsite in Ibadan, Oyo State.

The author of that piece, which was cited in some environment-related publications including the Waste Atlas 2014, was at the time a rookie Tribune reporter by the name of Moses Alao.

Nine years after the succinct narration of the agonizing lifestyle of Awotan residents was exposed to the world through the instrumentality of the pen of this writer, I am returning with a different story of how the agony of Awotan residents has turned to a beautiful testimony. The other difference is that I am writing this time, not as a rookie Tribune reporter but as a Special Assistant (Print Media) to the Oyo State governor, ‘Seyi Makinde, the man through whose hands the story of Awotan, Ibadan has been rewritten.

In the 2012 article, the sad and sordid tale of stench, filth, and discomfort that residents of Awotan told was vivid. Indeed, the reality of the Awotan dumpsite, which according to a 2014 Waste Atlas was one of the 50 biggest dumpsites in the world, was that of hopelessness, as there was no definite end in sight for hundreds of residents of the area. Many had indeed, resigned to fate, while those who could afford to abandon their homes did so to become tenants in other parts of Ibadan. Some others scurried far away from Ibadan city, pursued by the odoriferous air of Awotan.

A short trip down history lane shows that the dumpsite became active around 1998 and that it received 36,000 tonnes of Municipal Solid Waste per annum. The dumpsite had about 500,000 people within 10 kilometres, with the distance of the nearest settlement only 200 metres. Such was the closeness of the residents of Awotan to the environmental hazards and dangers that the dumpsite posed. But for years, their cries met with no milk of human kindness from successive administrations, especially that of Senator Abiola Ajimobi, which spent seven of the last nine years in office.

Many kilometres away from Awotan, the Eleyele Lake and the IITA Forest Reserve were natural resources at risk from the hazards of the mighty dumpsite. But no, the cries for help from the humans of Awotan and the silent cries of the natural resources fell on deaf ears for years until early 2020, less than one year after my principal, Governor Seyi Makinde took office as governor of the state.

Today, the sad story of Awotan residents has changed for good, and what was reported as agony in 2012 has now become a testimony, as the Oyo State government has turned around the Awotan Dumpsite to a world-class landfill capable of employing about 3,000 workers and also generate up to 6 megawatts of electricity through biogas. The landfill is reputed to be the first of its kind in the country.

Not so far away from the new landfill, another reason for Awotan residents to be happy has been put on the ground- the 12-kilometre Apete-Awotan-Akufo Road is being constructed. The road, which is being constructed with a first-of-its-kind concrete pavement in Oyo State has offered hope to hundreds of businesses and thousands of residents in that axis. For anyone conversant with Apete-Awotan, the story of the rigour and agony of navigating between the densely populated area and the Ibadan city centre is better left unsaid, with the previous administration looking the other way throughout its eight-year tenure.

Today, with the commissioning of the Awotan Landfill and the unveiling of the Oyo State Clean and Green Project, (which according to Governor Makinde were aimed at improving the environmental and social well-being of the residents of the state) and the ongoing construction of Apete-Awotan-Akufo road, thousands of Awotan residents can now heave a sigh of relief.

Outside Awotan, the construction of the landfill has now also addressed the waste management challenge of Ibadan, the state capital, drastically, serving as a solid foundation for the new waste management architecture introduced by the Makinde government.

But aside the improvement in the general environmental landscape in Ibadan, the beauty of the Awotan Landfill project is that it is capable of providing jobs for at least 3,000 people while the state government is also working towards converting the methane gas that will derive from the waste to electricity.

According to the CEO of Messers Macpresse West African Limited, Alhaji Idowu Salawu, the six-hectare landfill can generate 6 megawatts of electricity.

“Another good thing that we have derived from here is, before we completed this project, we have been receiving commendation from the residents of this area. What we did here is purely scientific. The gas component here can power 1megawatt of electricity on a 1 hectare of land. So, since we have six hectares here, we can generate 6megawatts of electricity,” Salawu had said. Talk of killing many birds with one stone; Makinde has achieved that feat with the Awotan Landfill project.

Most importantly, many critics of the government had come at Governor Makinde in the last 21 months for allegedly not following “the Ajimobi template on the environment,” though these people failed to see how badly that template faltered in addressing the waste challenge from its roots. But, aware of the monstrous challenge the state capital would continue to face unless the filthy and uncontrollable dumpsite system in Ibadan metropolis is taken out of the mix, the incumbent administration took its time to address the challenge from the roots with the award of the contract for the upgrade of Awotan and Ajakanga two of the four dumpsites in

Ibadan, with the remaining two Lapite and Abaeku to come afterward.

The governor had this to say: “When we were confronted with the issue of waste in Oyo State, we had two main choices. One, a quick fix, which could have happened sooner, or a more complex and far-reaching solution, which will take some time.

“The quick fix would have just meant that we are just kicking the ball further down the road. Sometime in the future, we will, again, be confronted with the issue of waste disposal. Maybe then, it will be another administration to deal with it, but we would have gone away with the tag of ‘Architect of modern Oyo State.’

“One, those who live near this dumpsite, the nearest settlement is just about 200 meters away from where we are right now, would have had to continue dealing with their groundwater contamination and their water will have remained unsafe for them to drink.

“Secondly, they would have continued to live with the stench coming from this dumpsite. The multiplier effect is that those who have properties for rent around here would have a hard time letting them out and, of course, I have spoken about the health implications as well.

“As a matter of fact, when I met some people here, they said they abandoned their houses here and relocated to the city but, the good news is, they are coming back now.

“So, we decided on the second option. Yes, it took more time, which meant that people complain about refuse disposal for a little longer but we knew that when we accomplish what we set out to accomplish here, the result will be glaring to all. We are standing on the ground now and we can see everywhere.”

With the commissioning of the Awotan Landfill, the state’s Commissioner for Environment and Natural Resources, Barrister Abdul Lateef Oyeleke had also made it clear that with the completion of Awotan, the focus of the administration would shift to Ajakanga Dumpsite, which according to him, would also be upgraded to a landfill.

For the teeming residents of Ajakanga neighbourhood in Oluyole Local Government, the feeling that help is on the way is quite palpable and they can well rest assured that their days of regrets will soon be over: that is the feel-good factor that Makinde is bringing everywhere across the state.

Governor Makinde has, in the last 21 months, been busy sharing hope and restoring confidence in governance. From Moniya to Iseyin where a 65-kilometre road abandoned for decades has come back to life, from Ajia to Amuloko where those who never expected to see an asphaltic tarring are now rejoicing over the 21-kilometre road project to within Ibadan metropolis where landmark bus terminal projects and a newly improved Lekan Salami Stadium have sprung up, the feel-good factor looms large across the state.