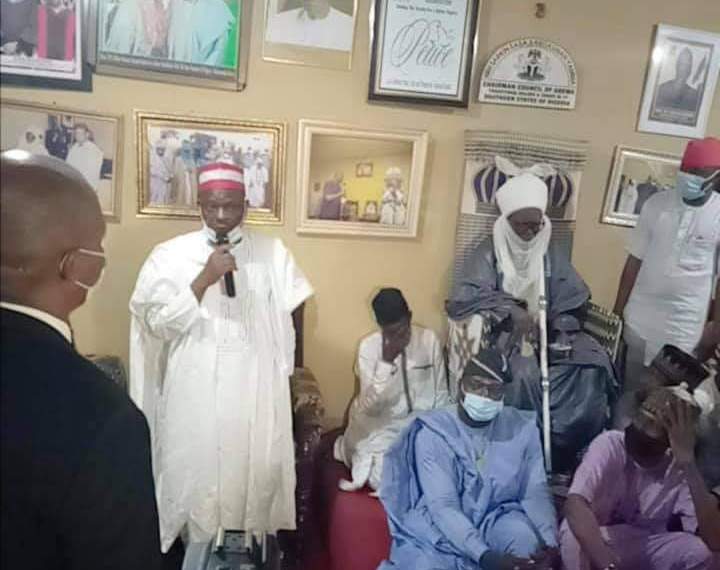 Former Kano State Governor Sen. Rabiu Musa Kwankwaso has appealed to the Hausa and Yoruba communities in Shasha, Ibadan to allow restoration of the brotherliness that once existed between them.

He made the appeal during his visit to the community in Ibadan, the Oyo State capital Friday evening. This came as the real cause of the crisis was revealed.

Speaking during Kwankwaso’s visit to the Baale of Sasa Amusa Ajani, the member representing Akinyele Constituency in the Oyo State House of Assembly, Hon. Kehinde Olatunde, revealed that the crisis was about who should be the new leader of the market.

He said Hausa community has produced the chairman since the establishment of the market in 1979, adding that the Yoruba traders insisted that a Yoruba person must be allowed to lead the market this time.

“Since 1979, Hausa have always produced the chairman of the market but the Yoruba traders said it must be one of them this time. What has happened is a regrettable incident. We want you to use your good offices to bring total reconciliation,” he said.

In his own remark, Baale Ajani corroborated Olatunde recalled that though Yoruba inhabited the original village in Sasa, Hausa traders joined them 16 years later and that they have been coexisting without any crisis.

He said trouble makers were behind the crisis that engulfed the market last month. Amusa appealed to all traders to return while the government fulfills its promise to rebuild the market.

He, however, objected to preferential treatment for Hausa traders, saying it will be unfair to pamper them at the detriment of Yoruba traders after they have allegedly set their stalls ablaze.

“Don’t resettle them and abandon us. That will be unfair. Let them return to the market and let the government fulfill its promise so that Sasa market will come alive again for all traders.”

Responding, Kwankwanso appealed to both parties to give peace a chance, stressing the need for total peace in the country. “What I saw (burnt shops) is not good for anybody. Let everyone doing legitimate business ensure peace reigns.

I appeal to all concerned to rebuild Sasa market.” At the Sarkin Sasa’s house, Kwankwanso also appealed to the Arewa community to continue to live in peace with other members of the community. The market was embroiled in violent crisis last month with several shops and buildings set ablaze by angry youths.