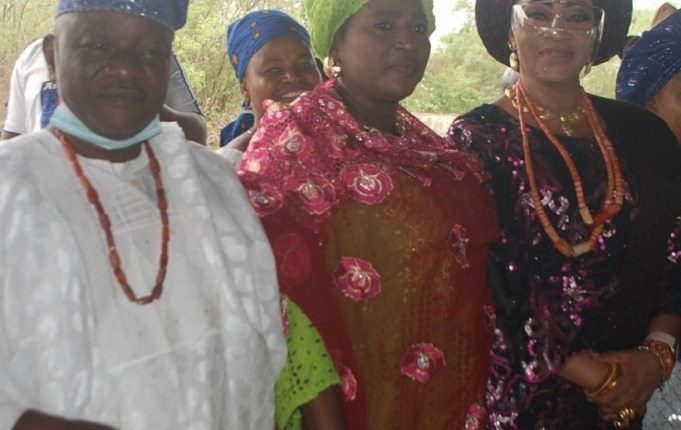 The council of Market leaders (Iyaloja) across the 11 local governments in Ibadan land had in an emergency meeting suspended Mrs. Isiwat  Abiola Ameringun as the Iyaloja General of Ibadan land

The angry market leaders who stormed the venue of an emergency meeting at Trans Amusement Park for a meeting of congress of Babalojas and Iyalojas in Oyo state with a petition against Mrs. Iswat.

In the petition duly signed by the Iyalojas from the 11 local government councils in Ibadanland, Amerigun was alleged as follows,

“We the Iyaloja-Generals from the 11 local government areas in Ibadanland unavoidably write this petition to register our displeasure on the immoral, unruly and unethical practices engaged in by Chief (Mrs.) Iswiat Abiola Amerigun since her installation as the Iyaloja-General of Ibadanland.

“Permit to bring to the notice of the Congress that Chief (Mrs.) Amerigun has been using her position to engage in various activities bringing disrepute to the exalted office of Iyaloja-General of Ibadanland. We have received several complaints from the traders, market women against her person.

“Amerigun for over a year now has been associating, holding several meetings with some groups whose interest is to cause disunity among traders, artisans, market men and women in Oyo State. She has in many occasions worked against the objectives and rules of our associations to satisfy her selfish interest.

“To make the matter worst, it is sad to note that Amerigun since her assumption of office, has never brought any innovation, progress, development nor added value to our market places. No effort from her to fight the cause of traders, artisans, market men and women in Ibadanland.

“She has always been seen in the corridors of politicians and sociocultural groups for the purpose of enriching herself without minding the suffering of our associations.

“Instead of working with the right authority to resolve the crisis rocking our associations in the state, she aligned with those working against the development of our market places and businesses,” Iyalojas alleged.

The petitioners went ahead to communicate their decision on Amerigun to the Congress of Babalojas and Iyalojas in Oyo State, they stated as follows, “with the current state of economy which has made it difficult for businesses to survive, we the Iyalojas in Ibadanland have decided to source for someone who would be able to source support for our businesses and bring development to our market places.

“After putting all variables into consideration, we cannot help but to announce indefinite suspension of Chief (Mrs.) Isiwat Abiola Amerigun as the Iyaloja-General of Ibadanland with immediate effect from the date this petition is signed,” they declared Amerigun suspended.

The council of Iyalojas in Ibadanland didn’t leave space for unexpected but went ahead again to announce the replacement of Amerigun with Alhaja Saariat Olorunero.

“It is also important to let the congress and members of public aware that we have appointed Alhaja Saariat Olorunero as the Acting Iyaloja-General of Ibadanland. Her appointment is with immediate effect from the date this petition is signed,” the Council stated.

“We hereby which to inform the congress of Babalojas and Iyalojas, traders, artisans, market men and women, the Chairmen in the 11 Local Government Councils, Oyo state government and all other relevant authorities not to honour any request, document or decision make or present on behalf of traders, artisans, market men and women in Ibadanland by the suspended Iyaloja-General,” the petitioners warned.

In the communique written at the end of the emergency meeting of the Congress of Babalojas and Iyalojas in Oyo State, Amerigun issue was ratified and committee was set up to investigate the matter.

“That the Congress has setup a 5-member committee to investigate and submit back to the Congress its recommendation within four weeks from the date stated on the petition. Meanwhile, the Congress upheld the suspension of Chief Mrs Iswiat Abiola Amerigun, pending the outcome of the committee’s report,” quoted from the communique written at the end of the Congress.

Police Rescues Two Victims Of Quarry Kidnap, In Search For Three Others