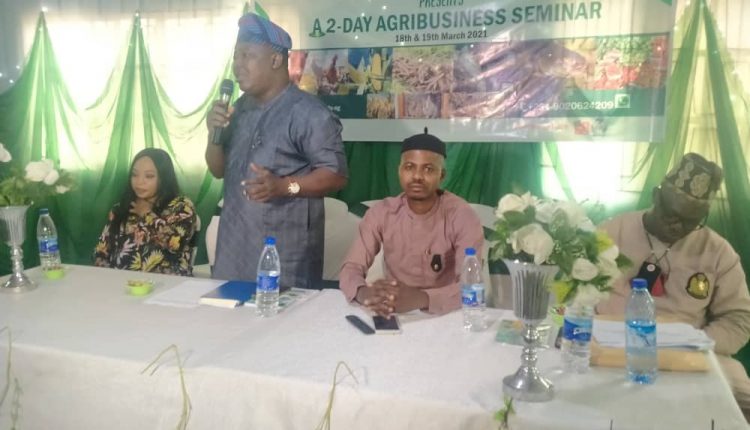 Cedar famers’ Business is an agro based training institute that helps train people interested in delving into agribusiness.

In a two day session organized by the school to train farmers in the profitable venture of agribusiness, farmers were educated about the 21st century agric-practices that increases productivity and high profitability.

The program which was declared opened by the CEO of Cedar Farmers Business School Dr. Mrs Foluke Oluwatoyinbo, She in her opening remark stressed the importance of modern best practice in agribusiness to enhance profitability.

Other Eminent personalities at the event was the Oyo State Commissioner For Environment, Barr. Idow Oyeleke, who in his own speech discussed the new gold mine in forestry, The Honorable commissioner took time to explain the nerd for afforestation in recent time as it is a way to protect our climate as well as a bankable investment, He mention series of trees that could turn a poor man into a millionaire within a short while.

Some of the Resource Persons/Experts at the event were Dr. Adewumi I. O, Mr. Adeniran Adebayo, Mr. Ayeni, all from the Federal College of Agriculture, Ibadan.

Dr. Adewumi in his own remark said agriculture in our secondary school days had been made to look like a punishment, they portray agriculture as a venture no one should dream of doing because it is so tedious and unattractive task, hence, no one ever dreams of becoming a farmer .

He said further that research has made agriculture an easy task, you do not need to look tattered anymore as a farmer any longer, the use of machinery and modern tools now help farner to maximize their profit in the business.

Mr. Adeniran Adebayo, A former Head of Department, Department of Agric Extension, Federal College Of Agric said, there’s need for a metamorphosis from the old agriculture to agribusiness of the 21st century, considering that most cultural practice are no longer appreciable in recent time, one need to know that agric practice of those days where our fathers make use of crude tools to work on their farm is no longer appreciated but in the modern Practice of agribusiness, one person can cultivate up to a thousand hectares of land with modern machinery at a relatively low cost and make more profit.

A representative of the Central Bank of Nigeria, Mr. Titilayo Matesun was also there to provide funding options for farmers at the event, he stressed the need for old and new farmer to liaise with Entrepreneurship Development Institutes (EDIs) that are approved by the central Bank in order to get loan to fund agric businesses.

He said those EDIs would train and certify farmers in entrepreneurship development skills, record keeping, financial management and how to draft a business plan and forward it to CBN for perusal, after perusal CBN would invite such applicant for interview to test his/her knowledge about the business.

The program after conclusion was well appreciated by the participant, most said its an eye opener and they are glad to have subscribe to the program.