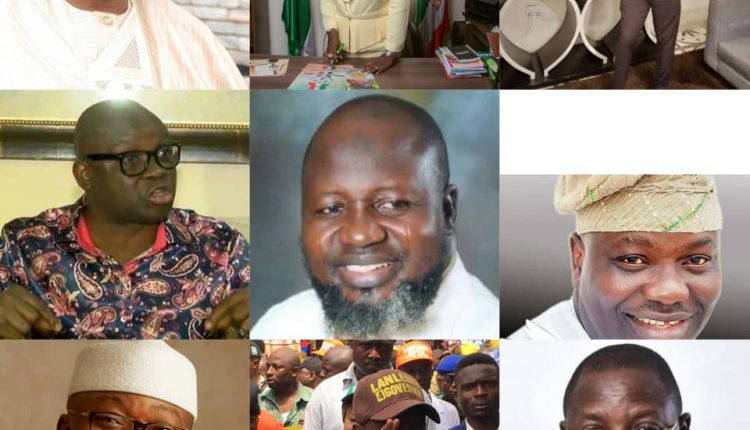 The Political cloud of Oyo State has been so unclear in recent days, the reason for this is not far fetch from the fact that there are claims within the opposition camp in oyo state, the All progressives Congress (APC) that the governor of Oyo state, Engr. Seyi Makinde is making moves to join APC in a shortwhile.

Though, this allegation has been cleared by the Chief Press Secretary To The Governor, Taiwo Adisa, where he describe the allegation as a lie from a pit of hell, He said it’s only a ploy from the opposition to distract the Governor from the good job he’s doing.

However, from all indications, things seems not to ogour well in the governor’s camp, There’s been series of crisis that have been rocking the People’s Democratic Party in the state and across southwest which could affect the governor’s re-election bid.

The superiority battle between governor Makinde and the former governor of Ekiti State, Ayodele Fayose, over the leadership of the party in the zone is still a fresh battle, as the Zonal Congress approaches.

Gov. Makinde in his bid to solidify his leadership in the zone annointed a former deputy Governor of Oyo State Amb. Taofeek Arapaja as the zonal chairmanship candidate from his camp, against Eddy Olafeso of the Ayo Fayose camp.

Only time will tell Whose camp will win the battle, as Fayose despite all moves by Rivers State Governor Nyesom Wike And Sen Bukola Saraki has yielded no fruit.

Some key players, leaders of the People’s Democratic Party in Oyo state are not getting it well with Makinde, the likes of Chief Bisi Olopoeyan, Alhaja Mulikat Adeola, Sen. Femi Babalola, Hon. Muraina Ajibola and there are clear indication that the Deputy Governor Engr. Rauf Olaniyan is not in good terms with the governor, these people are undoubtably the machinery that saw the dream of Seyi Makinde become reality. Our Source Said they are all teaming up with Fayose’s Camp.

In less than two years, Gov. Makinde had shown that he lacks proper people management skill, as he has failed to manage those who formed coalition with him to make his dream come true, the likes of Sen. Femi Lanlehin, Akogun Sharafdeen Alli and other prominent politicians loyal to the Osi Oluban, Chief Adewolu Ladoja, it’s obvious from Ladoja’s body language that Makinde has not been doing well to his camp.

From the foregoing, one would easily deduce that Makinde is politically naked, hence, the need for a new political ally if at all he wishes to contest for a second term.

Our source revealed that some APC chieftains in oyo state have been recieving benefits from the Makinde government either in cash or in kind.

The source also revealed further that the former governor of Ogun state, Sen. Ibikunle Amosu, governor of ekiti state,Kayode Fayemi and a former minister of communicatiin Barr. Adebayo Shittu and some other APC chieftains in oyo state are the one arranging for the move of Gov. Makinde into the proggressive fold.

This online newspaper gathered that the former governor of Ogun State, Sen Ibikunle Amosun and Kayode Fayemi , the governor of Ekiti gifted Gov. Makinde a substantial amount of money to sponsor his 2019 Election, against the candidate of APC, Chief Adebayo Adelabu, who was a political son of the Jagaban of Lagos, Asiwaju Bola Tinubu.

Meanwhile, Some Members of the APC in oyo state loyal to burdillion like Adebayo Adelabu, Sen. Femi lanlehin, Sen. Soji Akanbi, Sunday Dare and a host of others, as soon as the Planned move was leaked out, tighten their grips on the party Structure from the National Working Committee, Tinubu who is eyeing the 2023 APC Presidential ticket, was said to have used his own foot soldiers, A rep member from Oyo, who is a member of the APC interim Committee Hon. Akinremi Olaide Jagaban in conjunction with others who are loyal to him in the APC interim Committee to forestall the plan move by the Almighty Abuja Boys.

About a week ago, some APC stalwart loyal to the Ajimobi dynasty held a meeting with the wife of the late Governor, Chief Mrs. Florence Ajimobi at her Oluyole residence to solidify their loyalty to the Ajimobi political house.

Governor Makinde, haven seen the dificulty he’s facing in trying to join the APC, took a smart move to quash the rumors, and have probably resolved to stay in PDP and fight his battle to finish.

Reasons Seyi Makinde has tried to disarm Chief Bisi Olopoeyan by every means possible, it was recently reported that Chief Bisi’s name was missing in the list of National delegates of PDP for the party’s zonal congress.

Meanwhile Hon. Mulikat Adeola recently raised alarm over what she describe as plan to assassinate her by one of Seyi Makinde’s hitmen, who’s also the chairman, disciplinary committee of the park management system.

Gov. Makinde on wednesday, while speaking at the Pan-Yoruba congress at Mapo hall Ibadan, Has shown he’s battle ready and has declared he doesn’t give a hoot about losing re-election in 2023.

he was quoted to have said, “Let me tell you here today, I don’t have a political father. It was God who made me governor and not human being. I fear only God and not any human. No matter how powerful a man is, I cannot fear him”.

“If the people of the state decided that they don’t want me again, I will only take my bag and leave because I don’t have a pin in the office.”

This seems to be coming from a man who had given up the battle and accept whatever worse the outcome could be.

Is Makinde playing a smart one on the aggrieved PDP Members with that statement?

If the South-west zonal Congress of PDP is conducted who among the two fraction, whose side will emerge victorious? Makinde’s Camp? or Fayose’s Camp?

They discribed the Conduct of the Primaries in the State as, shambles, meared with handpicked imposition of Candidates by Hob. Makinde, They claimed that if he Makinde wanted to impose his candidates the people he shouldn’t have allowed Aspirants purchasing the form, spending so much on the process.

Alhaji Olopoeyan said Makinde was afraid to Conduct a free and fair primaries because none of his imposed candidates would win, and that was why the Governor single handedly handpicked his boys inorder to further use them to distroy the party they built.

Now that Makinde’s Move to APC is Forestall it will be a tensed outmostphere for him, because he will have to fire from all cylinders in the battle of who holds the grip of PDP Structure Both within the State and South-west in general.

It promises to be an interesting politiking in Oyo State and South West in general as we might be seeing influx of decampings from both Major Political Parties, The People’s Democratic party (PDP) and The All Progressive Congress (APC).