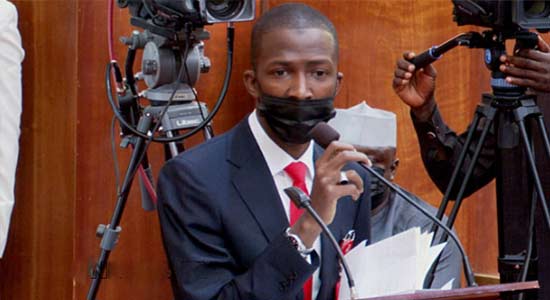 The Chairman of the Economic and Financial Crimes Commission (EFCC), Abdulrasheed Bawa, yesterday warned whistleblowers against misleading the agency.

He said the commission would no longer tolerate false information with the newly-created Directorate of Intelligence verifying information before EFCC takes action.

The suspects had claimed that monies were stashed in Ogbeh’s residence in Lugbe, Abuja, which turned out not to be true.

The agency’s Head of Media and Publicity, Mr. Wilson Uwujaren, said Bawa expressed concern about the activities of supposed whistleblowers who mislead the agency through false information.

He said scarce investigative resources had been wasted by the agency in following up false leads that frequently come to dead end.

Uwajaren quoted Bawa as saying the activities of false whistleblowers “detract from the noble intendment of the Whistleblower Policy of the Federal Government which seeks to incentivise information leading to the recovery of stolen wealth.”

The EFCC spokesman added: “Noting that the Whistleblower Policy was not designed as a tool for unscrupulous citizens to send law enforcement agencies on wild goose chase or set them against their perceived enemies, he vowed that the EFCC will not hesitate to prosecute any whistleblower who willfully provides the agency with false information.

“He, however, reiterated the Commission’s preparedness to work with genuine whistleblowers and acknowledged the breakthroughs which the EFCC recorded in its assets recovery drive, using information supplied by whistleblowers.

“He advised genuine informants to be cautious and ensure that they have accurate information before engaging with the agency.”

Bawa pledged that the Directorate of Intelligence which was recently created, will henceforth ensure that all information received by the EFCC is subjected to rigorous due diligence before action is taken.

Arraigned at the FCT High Court by the Abuja Zonal Office on a one count charge of false and misleading information were Theophilus Omambala, Lawal Umar and Alexander Danjuma.

The charge reads: “that you Theophilus Omambala sometime in 2021 at Abuja within the jurisdiction of this Honorable Court, gave false information to officers of the EFCC that monies were stashed at the residence of one Audu Innocent Ogbeh located at Lugbe District of the FCT, which information turned out to be false, untrue and misleading and thereby committed an offence punishable under Section 39(2) (b) of the Economic and Financial Crimes Commission Establishment ct (2004).

The defendants pleaded not guilty to the charge preferred against them.

“In view of their plea, the prosecuting counsel, Aliyu Bokani Usman asked the Court for a trial date and that the defendants be remanded at the Nigerian Correctional Centre, Kuje.

“Counsel to the defendants, A.I. Na-jirgi prayed the Court to grant his clients bail.

“The judge (Justice Musa Usman) rejected his oral application, insisting on a formal bail application which should be filed before the next adjourned date.

“The defendants have been remanded in the Kuje Custodial Centre pending determination of bail application. The case has been adjourned till June 21, 2021.