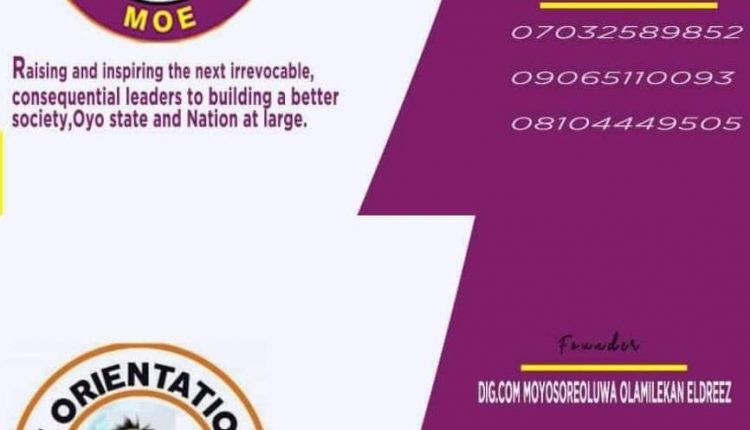 The entire members of Female Orientation Team Initiative and Moyology Orientation Empire Foundation expressed our good wishes to sincerely appreciate Oyo State Governor Engr. OLUSEYI ABIODUN MAKINDE on the recent irrevocable and unbeatable record breaking of the FLAG-OFF of the kind awaiting FLYOVER and conversion/upgrade of EACOED to University of Oyo, Oyo state.

Also, we commend the distinguished honorable members of this 9th Assembly under the Leadership of Rt. Hon Adebowale Edward Ogundoyin, the proactive speaking speaker from the constituency Ibarapa East in supporting the approval of this great project and beyond.

Effectively, we appreciate the oneness, unity and peaceful coexistence among the members of the cabinet and Governor Seyi Makinde towards ensuring the reality of this giant Stride effort projects come to lime- light.

It’s another history written on this day via the government of the day in ensuring and making bold to have an enabling environment as better Oyo State is assured and improving the envisioned Infrastructures, boosting the economy of the state now and for the future.

Interestingly, the flyover will in a way solve the problem of time wasting while going about to office, solve the high records on the issue of major or minor accident on that route, pollution effect, it will also contributes to the economic growth of the state.

When completed the residents, commuters, business owners of Bashorun, Akobo, Ojurin and Olohunda Aba, Aiyegoro, Odogbo Barracks will have a complete omen of joy especially from traffic congestion where valuable time is wasted by motorists and commuters.

Progressively, the conversion and upgrade of the newly approved EACOED school to Emmanuel Alayande University of Education Oyo is a welcome development since the creation of the school about 120years ago.

The school in recent times has been running an affiliated degree programme with another university and government has discovered that the students in that programme actually out-numbered the registered NCE students that represent the core mandate of the school.

Amazingly, with what is on ground, the school with the infrastructure, materials, and skills of the educators there, can actually take off as a university hence the decision of the government under the Leadership of H.E Engr Seyi Makinde and with the backing of Honorable members under Rt. Hon. Speaker Adebowale Edward Ogundoyin showed that this administration has the interest of the people, students and youth at heart.

In a nutshell,I noticed that students of nowadays prefers to have a degree than just NCE, therefore with the location of the school and the presence of the Federal College of Education in Oyo and College of Education at Lanlate, the people of Oyo State were widely convince that the school has sources for students that can take the degree programme.

From the Governor’s speech, he said and I quote, “It can stand, and based on that, the cabinet approved the upgrading of the school.
“Now, we will take steps to apply to the relevant authorities for upgrading any moment from now.”

On a final note, the leadership of FOT/MOE Foundation respectively hereby encourage Mr Governor to continue his open, transparent door policy as promised during the campaign and in the interest of the people to make his administration succeed and continue to deliver more dividends of democracy alongside an all inclusive government in the name of his LEADERSHIP.

May God the Father being your Godfather gives you the wisdom, audacity to deliver a real better Oyo state as assured beyond charlatans.

“Oyo State people know where we started, we know where we’re and definitely would like to follow Seyi Makinde to where he’s taking us”.

This is a MISERY of CONFIDENCE/ASSURANCE that some VILIFIED oppositions calls HAUGHTINESS.

Together we can work/walk together and Make a Difference (M.A.D) in our dear State and Country Nigeria.