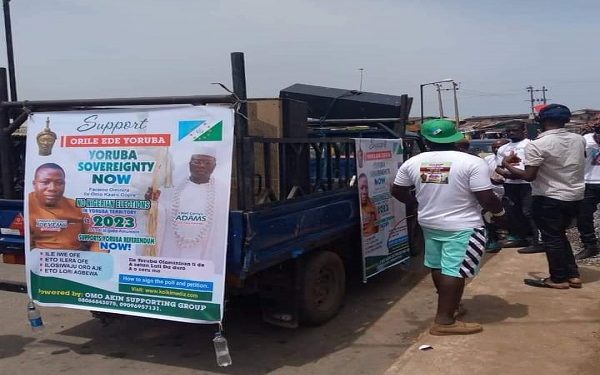 Supporters of Yoruba rights activist Chief Sunday Adeyemo aka Sunday Igboho on Sunday stormed Agege in Lagos State to canvass support and solidarity for establishment of the Yoruba Nation.

TODAYAPLASH.COM had reported Igboho said he and those who believe in his cause will always defend the Yoruba race from aggressors.

Igboho stated there is no basis for ‘one Nigeria’ as insecurity spreads to the southwest region, adding the only solution is for the Yoruba nation to stand on its own

In a live broadcast shared by Sunday Igboho’s spokesman, Olayomi Koiki as monitored by TODAYSPLASH.COM, supporters moved around creating awareness on the needs for Yoruba Nation.

Igboho’s aide was also seen sensitising passersby on the importance of having the Yoruba nation and why it should secede over alleged inequalities in the system.

He said in the video: “According to the amalgamation of 1914, after 100 years, we can all go our separate ways, that 100 years has been completed since 2014, why are we still together?

“Check the N100 note, it is stated there that the amalgamation ends in 2014, it has been over 7 years we have been suffering now, no jobs, the government of this country does not favour us, they only favour themselves. Let us leave this country, forget about the N2, 000; N3, 000 or N10,000 they give to you.

“We don’t have the money or rice to distribute to you but we are fighting for a better future for you. Except you are a politician, this country does not favour you. Let us join hands together to support the independence of the Yoruba nation.

“We have lots of mineral resources that we will utilise and live well. The Nigerian government has no reason whatsoever to say we should not leave but they are enjoying this Master-Slave relationship. Nigeria has refused to let us go simply because of the benefits derived from us, we have gold, oil, cement and every other thing.

“Yorubas are not being favoured, Yoruba nation now. They cannot kill us and kill our grave. The Yorubas are not enjoying this country, Igbos too even the Hausas are crying, only Fulanis are enjoying everything.”