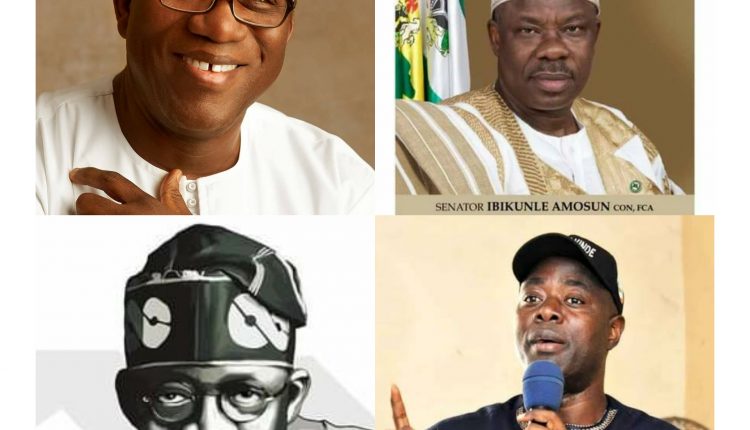 Facts have emerged on how former Ogun State Governor, Sen. Ibikunle Amosun and members of his anti-Tinubu group, including Ekiti State Governor, Dr Kayode Fayemi, are making efforts to take over the All Progressives Congress (APC) in Oyo State.

The aim of the group, Newspeakonline learnt, is principally to hijack the party in the state as a way of weakening the chances of Asiwaju Bola Tinubu from picking the presidential ticket of the party in the 2023 election. The party structure is currently in the hands of followers of the late governor Abiola Ajimobi who are loyal to Tinubu.

It was gathered reliably that the script is being coordinated by some top APC national leaders in the north who are bent on frustrating Tinubu’s efforts. In the plan, the group is working with Governor Seyi Makinde who was elected on the platform of the Peoples Democratic Party (PDP) in 2019, to defect to the APC and automatically pick the governorship ticket for a second term in 2023.

Makinde is currently having it tough in the PDP both at state and regional level. Opposition to his leadership is led by former Ekiti State Governor, Ayo Fayose.

Amosun and other anti-Tinubu forces within the APC are cashing on the strong opposition to Makinde to offer him a soft landing. The plan is that Makinde’s arrival in APC will make him the party leader automatically thereby subduing existing gladiators and party leaders loyal to Tinubu.

Amosun was one of the sponsors of Makinde in the 2019 election. It was one of the ways he got back at pro-Tinubu forces in the APC of which the late Ajimobi was a strong one.

In perfecting their plan, some party leaders who lost out under Ajimobi, most of whom gathered under the defunct Unity Forum, are returning with the impression of fostering a genuine reconciliation. But the overall aim is to hijack the party for the anti-Tinubu forces to the profit of Amosun, Fayemi and other APC leaders in South West who are opposed to Tinubu.

With Ekiti under Fayemi, the group needs the control of the party in Oyo State to add to its followers in Ogun. It is not clear if Ondo State Governor, Oluwarotimi Akeredolu (SAN), will still work with them to achieve their grand plan of adequately breaking the grip of Tinubu on South West.

A reliable source within the party told Newspeakonline: “You can see all of those gathering and going round now pretending that they are fostering genuine reconciliation. You know they are Amosun’s loyalists. They have an agenda, and that agenda is clear to all.”

Another reliable source disclosed that Fayemi has become almost a regular visitor to former Governor Adebayo Alao-Akala at his Bodija, Ibadan home. The source explained that with Alao-Akala as the APC leader in Oyo State, the anti-Tinubu forces are confident they can work with him.

It may be an additional reason Fayemi supported Akala as the party’s leader shortly after he intervened in the state’s APC crisis over who succeeds Ajimobi as the Oyo APC leader. At meetings held at his Idi-Isin, Ibadan residence, Fayemi made all stakeholders see that Alao-Akala was the clear leader having served as governor.

As the battle for 2023 gathers momentum, Oyo State is obviously a state to watch for intrigues both within the PDP and APC as ambitious leaders go for the jugular of the two leading political parties.

PDP South-West Congress: The Outcome Of The Congress Will Create A Permanent Schism…