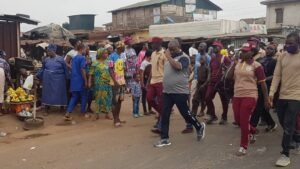 The fitness trek which according to the OYRTMA boss is advocacy to orientate the citizens of the state on traffic management whilst engaging Youths in activities that positively stimulates their mental health.

According to the ORYTMA boss, the exercise was to test the agility and stability of the OYRTMA officers and men as well as educate motorists and the people of the State on the rules, regulations and extant traffic laws of the State with a view to actualizing a saner road usage by motorists.

In his words, Dr. Fagbemi said, “we decided to have this joint endurance trek with other paramilitary agencies and bodies specifically to educate our motorists as well as subject the agility of our officers to sufficient stress to test their physical stability or otherwise.

During the walk, more than a thousand individuals decided to join us on their personal accord and the exercise was a huge success. Not only did it encourage our youths to shun engagements dangerous to their personal as well as societal wellbeing, but it also complimented the drive of the Engr. Seyi Makinde’s administration in positively engaging the youths in beneficial adventures”, he said.

Mogaji Fagbemi seized the opportunity to reveal that “His Excellency, the Executive Governor had graciously approved the employment of more Officers and men for the Authority”, which according to him would help boost the reach of the Authority. He however said in due course, details of the employment exercise would be made public and suitably qualified candidates would be invited to apply