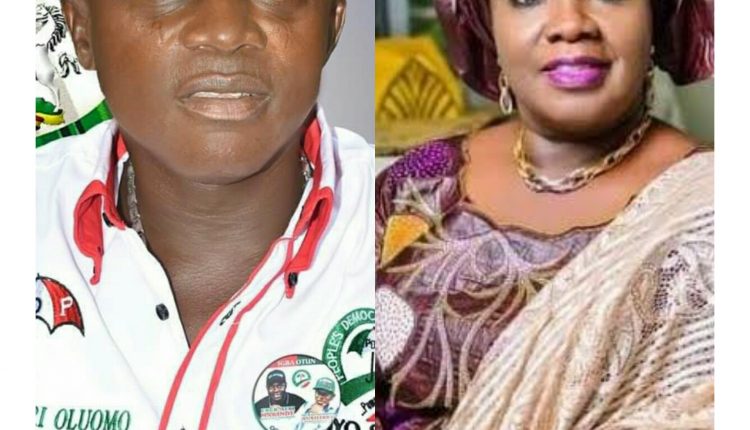 Hon. Mulikat had earlier raised alarm over the parade of his Ibadan and Ogbomoso residence by unknown men suspected to be men of the PMS disciplinary chairman who are gathering intelligence to assassinate her.

Auxiliary on the other had had denied any knowledge of Hon. Mulikat Adeola, saying he had never met her before and neither is he making any attempt on her life.

MAA group however described Mukaila Lamidi Auxiliary as an agent of evil, who with his cohorts always enjoy disturbing the peace of Oyo state, even after he was released from prison.

The Group blamed Oyo state governor, Seyi Makinde for accommodating and empowering him ( Auxiliary ) to perpetrate more crimes with making life for people.

MAA Conscious Group explained that, Mr. Mukaila Lamidi had met Rt. Hon. Mulikat on numerous occasions including when he was with the entourage of governor Makinde to Ogbomoso during the electioneering.

The statement credited to him is not only childish but piercingly devastating. How could Auxillary declare that he didn’t know Alh Mulikat that hosted him with Engr. Seyi Makinde in Ogbomoso during the 2019 electioneering process?

Has he forgotten that it was Hon Mulikat that arranged their meal both in the night and morning at the Imperial hotel, Ogbomoso.

Alhaji Mukaila Auxillary should remember that on several occasions he had met and discussed with our leader either at a political function or in the house of former Gov Alao-Akala.

Be reminded that on the day of PDP flag off campaign in Ogbomoso, you were one of the standby men of Gov Seyi Makinde in Ogbomoso for his flag off where Alh Mulikat stood with him and Gov Fayose, you were there life and direct while the campaign was going on and when she ( Rt. Hon. Mulikat ) gave her speech as well, but now l you are claiming you never met her again.

Myself And My Household Got COVID-19 Through Paul– Jude…

Thou, history has it that you don’t even need to know anyone before executing him or her, as all you need is the picture which you already have.

It’s no longer an argument that Auxillary is known for evil actions in the state which led him to prison. Could anyone have expected an ex-inmate disturbing the peace of people or making himself honourable again?

We wouldn’t blame this man so much if not for Gov Seyi Makinde who appointed a riff raft as a member of his cabinet, empowering him to kill, perpetrate more crimes and making life difficult for people.

It’s crystal clear why Oyo State is seriously having a set back on security. Mr Auxillary should not try anything funny with our leader, mother, sister and daughter of Ogbomoso land because the whole world is watching him. We have intelligence reports of all your actions and inactions towards this assignment of executing her but God Almighty would not permit you and your cohorts.

The whole state is in dilemma because of the evil you and your boys are perpetrating on a daily basis. Don’t forget that “evil men do live after them”. We have decided to ignore any distraction from you and your team but remain steadfast in our commitment to the consciousness of the environment, law enforcement and rights under the law to deal with you intellectually.

You would recall that last week we got a man named Adelaja from you writing a disclaimer on behalf of our leader but it failed on its arrival just like yours too.

We call on the general public to remain prayerful and sensitive as these elements are out there for evil. Human life is nothing to them more than a bottle of beer. We have the records of your unlawful involvement in the just concluded Local Government Area Primary election of our party.

Even though you claim not to be a politician in your press release but you keep wearing PDP attire and face cap here an there.

Did you not produced Ankara clothes with PDP logo ans sell the said clothes to your team at Five Thousand Naira? .

You do attends PDP events and activities but you don’t get yourself involved in politics. Who’s fooling who here please?

You ordered your PMS boys to disrupt PDP LGA Primary election in Ogbomoso and they did with a team led by Jimoh.

Have you forgotten that we see while crying? You cannot escape the mayhem you have caused, because you will soon face the wrath of law again.

Our kind advice is that you should turn a new leaf as nothing must happen to our mentor and mother, while we also urge the security agents to speed up action on investigation on the matter.

Video: ‘Accept Makinde as your boss or thunder strike you dead’, Auxiliary Threatens…