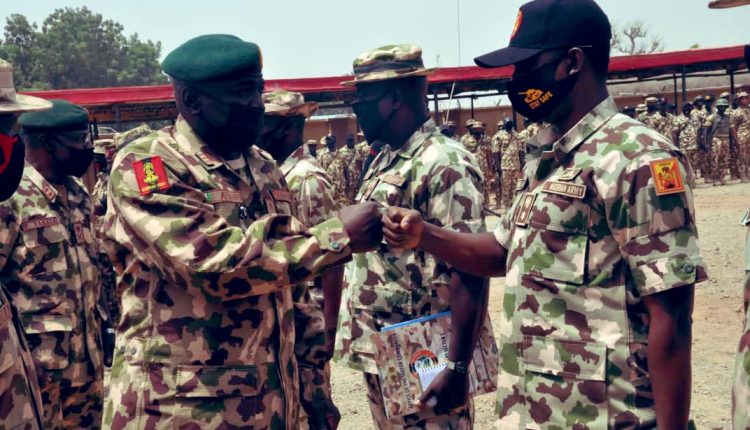 The Nigeria Democracy Working Group has expressed deep concern on the widely circulated allegation on none procurement and supply of arms and ammunition to the Nigerian military, and has unconditionally demanded for the “immediate setting up of a committee to investigate the controversial $1 billion vote approved and released for it, which was among other things meant to facilitate the war on terror”.

Comrade Ibrahim Waiya, the convener of the group, said in a release that, “it is our adamant belief that, an allegation of this magnitude coming from a highly respected personality in the person of the National Security Adviser to the President, Major General Babagana Mungono, must not be swept under the carpet”.

He said, “this is because as a democratic nation, we should be able to set a good example to other nations, especially among the African Communities, to reflect our long self-imposed position of the “Giant of Africa” by objectively getting to the bottom of the allegation”.

Waiya noted that, “rather than waging a war on personal vendetta against the person of the National Security Adviser, it’s clear from the content of this allegation that, the matter should not be about personality or individuality, but we should rather be mindful about the corporate reputation and integrity of our country which is gradually drifting into total muddle.

“This growing degree of the culture of impunity if it is allowed to continue in our system would surely choke the practice to demand for accountability and transparency, two major best principles of democratic governance widely accepted world over,” he noted in frustration.

He added, “It is also rather unfortunate as some individuals would place themselves above the corridor of the rule of law, and refuse to recognize themselves as servants to the people, but rather choose to always behave as political dictators with total disregard to the plights of the majority, hence the need for a special panel of investigation into this matter, and this action is not only desirable but is equally necessary.

“In our proposed agenda for the advocated investigative panel or high powered committee, the terms of reference for the committee should include: Discreet probe on the actual release of the alleged funds, how much has so far been expended on the procurement of the military equipment, what was the percentage of the supply, the name of the company contracted for the supply of the arms, under which office was the contract executed, who signed the contract on behalf of the Federal Government, who received the supply of the ammunition on behalf of the Federal Government, and which year was the supply of the arms effected, and how much percentage left and what is the next expected consignment, and which quantity of the supplied arms were distributed to the military formations in Nigeria, and lastly the names of the military formations that received the arms and the ammunitions.”

Hijab: We Will Push For Our Children To Wear Our Beads,…

The Convener hinted that, Nigerian citizens deserve an urgent response from the President Muhammadu Buhari office, by establishing a high powered committee to effect a “thorough investigation and presentation of comprehensive findings to the public regarding the procurement of the said arms.”

“This measure we believe would help Nigerian citizens to find solace on the growing anxiety they have been going through, since the beginning of the enduring controversy.

“Your Excellency, we wish to strongly draw your attention to an alleged and purported conspiracy to recycle some of the past and retired service chiefs into the mainstream of the Nigerian security architecture, even though the world has recognized their exhaustion and apparent inability to contain the increasing security challenges in the country during their tenure in office.

” This is a calculated theory of sabotage to your efforts in addressing the insecurity problems in the country, and if the evil plan succeeds, it would not only ridicule your long-established honesty and integrity as an upright leader, who stands for credibility and commitment to the general wellbeing of the country, but would as well damage the reputation of your Government in the eyes of the international community.

” It is on record that, the credibility of the people involved in this conspiracy is already in doubt and no serious person or group would want to give them another chance because of their woeful failure and the shame they had brought to this country.”

Waiya said, “It is on record that, your Government stands on the cardinal pillar against indecency and dishonesty and with the slogan of change mantra on zero tolerance for corruption in Nigeria”.

The Group, hopes that the good people of Nigeria shall receive a quick response to salvage the country from further shame and image damaging.
﻿
Dailypost