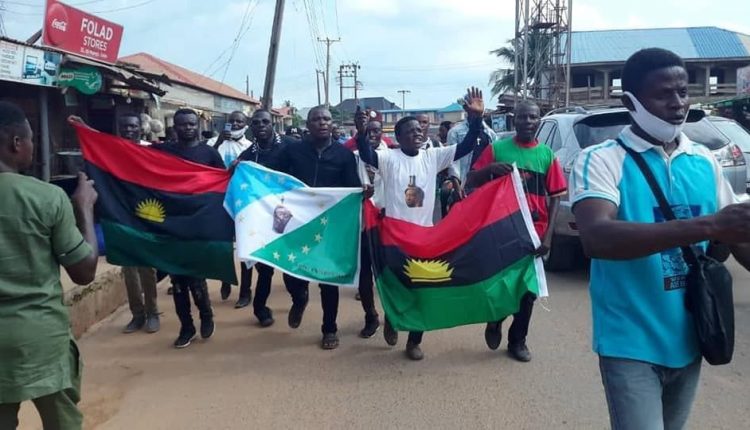 UMUAHIA—Soldiers of the 144 Battalion, stationed at Ariaria junction, along the Enugu–Port Harcourt expressway, yesterday, allegedly killed 16 gunmen who engaged them in a fierce gun battle.

A military source, however, said it was a joint operation of the Nigerian Army and police which led to the death of about 16 gunmen who were operatives of the Eastern Security Network, ESN.

The source said hundreds of security operatives on Tuesday night launched a heavy attack on the camp of the ESN in Aba, Abia State, killing no fewer than 16 of them and injuring others.

It was gathered that the operation was in response to a series of attacks against security personnel in the South-East. Not less than 20 security operatives have been killed in the region by unknown gunmen in the last three months. Police stations are also not left out in the assault as four of them were razed since January.

This came as the Abia State Government raised an alarm that arms and hoodlums had been imported and camped in a location in Aba for the March 27, 2021, Aba North/South federal constituency by-election.

However, the Nigerian Army, and the Indigenous Peoples of Biafra, IPOB, have dismissed as fake, the report that the military attacked the ESN camp in Aba, killing no fewer than 16 personnel of the security outfit.

The alleged killing is coming 48 hours after three policemen were ambushed and murdered by hoodlums in Abiriba, in Ohafia Local Council of Abia State.

The gunmen, said to be numbering about 50, engaged the soldiers at their checkpoint at the Ariaria junction.

Sources told Vanguard that before the gunmen arrived the area; the soldiers had gathered intelligence and laid in wait for them.

As soon as the gunmen arrived, they opened fire but the soldiers responded.

In the ensuing gun duel which was said to have lasted for over 30 minutes, 16 persons were shot dead in the duel. Other members of the gang reportedly sustained bullet wounds.

However, there are conflicting reports about the number of casualties. While some sources said 16 persons were killed, among them, a soldier, a top military source in Aba said only 11 gunmen were killed while there was no casualty on the side of the army.

“No soldier was killed, but we killed 11 of the gunmen. I assure the public that there was no casualty among the soldiers.” he said.

Reacting to the incident, Abia State government commended the soldiers for their gallantry, stressing that it is committed to the protection of lives and properties of Abia residents.

Assistant Director Army Public Relations, 14 Brigade, Ohafia, Captain Iliya Dauda, told Vanguard in Aba that there was no military operation against any ESN camp in Abia.

He rather explained that unknown gunmen attacked an Army checkpoint at Osisioma junction Aba but were repelled.

He said there were no casualty on the part of the Army but begged for more time to receive report from their men at the scene investigating and assessing the incident.

The Army spokesman urged members of the public to disregard the said report which he insisted was false.

Similarly, IPOB dismissed the said report as cheap propaganda by those who planted it.

IPOB Media and Publicity Secretary Emma Powerful, in a reaction said no ESN camp was attacked in Abia.

He rather claimed that the military indiscriminately arrested innocent Igbo young men and tagged them ESN personnel and executed them to create an impression that they had inflicted casualty on ESN.

kidnapper Shot Dead During His Attempt To Collect Ransom In…

Powerful said ESN was formidable and could not be easily dislodged by the Nigerian security agencies, adding that the outfit is in the forest to get rid of terrorists.

“They gathered innocent people last night and tagged them ESN operatives. Let them tell the world which ESN camp they attacked. Nigeria soldiers in their normal ways removed some young men’s clothes and saw marks on their body, then they arrested and tagged them IPOB and ESN members.”

But in a swift response, Captain Dauda denied any involvement of the military in the allegation, saying it was concocted to whip up sentiments.

He said the alleged photos of corpses in the said story were photoshops, insisting that the military did not carry out any military operation in any part of Abia.

Decrying alleged procurement of arms and importation hoodlums camped in a location in Aba for the March 27 election by one of the opposition parties, the Abia State Government tasked the security agencies to ensure that the hoodlums are swiftly arrested while others on the way are prevented from entering the state.

Commissioner for Information, Chief John Okiyi Kalu who disclosed this in Umuahia, explained that intelligence reports available to the state revealed that the opposition party plans to overheat the polity as a prelude to calling for full deployment of the military which will in turn create room for the deployment of the hoodlums with fake uniforms and procured arms.“

His words: “Specifically, we are aware that about 200 armed youths have already been camped at a location and are awaiting deployment with fake military uniform made available to them by an Abia born retired Army General who only recently joined the opposition party, with the intention of unleashing mayhem on the people of the state.

“We advise the police and military high command as well as office of the National Security Adviser (NSA) and the Department of State Services (DSS) to be wary of the antics of desperate politicians seeking for expansion of family enterprise, even at the expense of precious lives of citizens rather than growth and unity of our nation.”

Meanwhile, the General Officer Commanding, 82 Division Nigerian Army, Maj General Abiodun Lagbaja, yesterday, told officers and men of the 302 Artillery Regiment (General Support), in Onitsha, to remain professional and responsive in the discharge of their duties. Major General Lagbaja, also charged the soldiers to be conscious of their safety while at their duty posts, warning that they should not relax as if they are at their homes, just as he warned them about leaving only one person at their duty post for any reason to give hoodlums opportunities to attack them.

Major Gen Lagbaja’s visit is coming one week after hoodlums attacked two military check points in Anambra State where they killed three Nigerian Navy officers and made away with their riffles.

The GOC who assured his officers and men that the army authority is working hard to improve on their welfare, advised them to take the Astrazeneca COVID-19 vaccine to safeguard themselves and their loved ones from the dreaded Corona-virus pandemic.

He said: “The Nigerian Army will continue to carry out its constitutional responsibilities with high sense of professionalism despite any form of provocation.

“As soldiers, if you are six in a duty post, stay together and at alert. If you must give permission for any one to eat, you must not allow more than one person at a time to leave for any excuse. If you observe the rules of your engagement, there will not be any issue of human rights violation in the discharge of your jobs or attack against you.

“I have gone round Anambra State and I have discovered that soldiers are misbehaving. IPOB is trying to tell the world that we are Army of occupation and you must not prove them right. You must discharge your duties as soldiers of the Nigerian Army.

“The job we ask you to do is not to harrass and intimidate people or collect money at road blocks. When you stay together, you will fight together against the enemies. Permit only one person out at a time.”

He acknowledged that the soldiers have a lot of problems militating against their jobs but assured them that these problems are being addressed especially accommodation and other issues, adding that in no distant time, those problems will be a thing of the past.

“I am here for the first time as the GOC 82 Division to sympathise with the Nigerian Navy Onitsha Out Post for the loss of their three personnel and fire arms and to familiarize with you and know some of the problems you face.

“The Nigerian Army under the leadership of Lt General Ibrahim Attahiru is sincere in addressing your welfare issues and the only way to pay back for his genuine commitment is to work hard and in line with the rules of your engagement.”