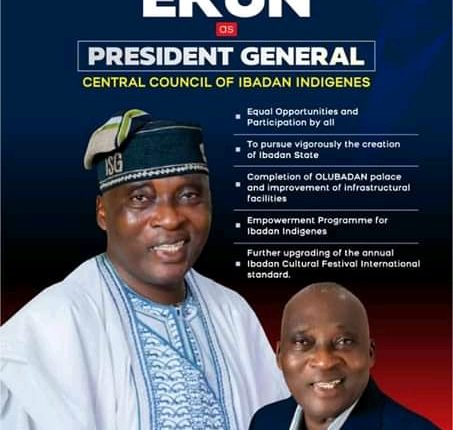 Ibadan Youth Progressive Indigene Association has urge and beg all financial and registered club under Central Council of Ibadan Indigenes (CCII) to vote for Chief Waheed Ekun as President General in the coming election slated for 2nd of April, 2021 at Ibadan House.

In his word of advise, The Spokesperson of the association Aare Alao Olalekan said there is need to put a round peg in a round hole towards the rapid development of Ibadanland.

“Waheed Ekun is a member of OAU Alumnus and a Grassroot per excellence with listening ear, he was Former Secretary General of CCII and his level of exposure across some international communities is something to talk about, his wealth of experience in both Health, Education and Social and Recreation affiliation is also a factor”

Chief Ekun social profile to mention but few was;

A vote for Chief Waheed Ekun is a vote for positive development of Ibadanland.