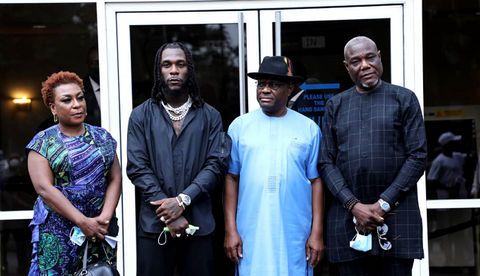 Rivers Governor Nyesom Wike shocked local and international artistes, who performed at a grand reception he organised for the Grammys award winner, Damini Ugulu, aka, Burna Boy, on Saturday night with N10milion gift to each of them.

The excited Wike also decorated the afrobeat superstar with the second highest state award known as the Distinguished Service Star of River State (DSSRS), which is the same honour bestowed on Deputy Governor.

Wike’s wife, who hails from the same Ahoada West with the musician, presented the award certificate to Burna Boy while the Deputy Governor, Dr. Ipalibo Banigo, gave him the award medal in the presence of top artistes such as Timaya, Duncan Mighty, Omah Lay, Mosey B, among others.

BBNaija Reunion: My Penis Got Swollen After Oral Sex With…

The DSSRS is the second highest distinction in Rivers State Order and is conferred on individuals in recognition of their exceptional service/performance in any field of human endeavour.

The governor also announced the government would allocate to him land in Old Government Residential Area of Port Harcourt and give him money to build a house there.

The governor recalled the state once produced the Most Beautiful Girl in the World, Agbani Derego, insisting that Rivers was blessed with talents.

The Governor commended Timaya, Duncan Mighty and other artistes who graced the award ceremony in honour of Burna Boy and announced a gift of N10million each to all the artists that performed during the concert.