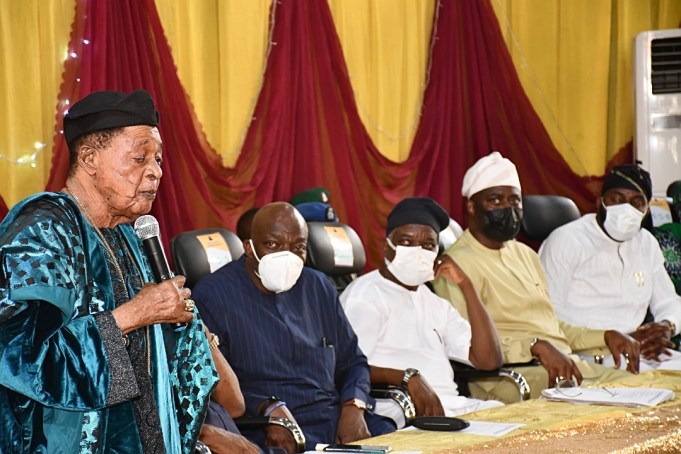 THE Alaafin of Oyo, Oba Lamidi Adeyemi III, Wednesday, expressed worry over the worsening insecurity in the country saying Nigeria is operating an adulterated federal system of government.

He said this at a security meeting with traditional rulers and security agencies in the state, organised by Governor Seyi Makinde which was held at the House of Chiefs, Secretariat in Ibadan

While presenting a 10-page security report of operatives combing the bushes to Governor Makinde, the Alaafin of Oyo lamented that the operation of the constitution would not allow the government to achieve effective security in their domains.

He said: “I want to say that we traditional rulers and royal fathers are stakeholders in the issue of security. They are killing and raping our sons and daughters in public. They are killing our people as well.

“It is appalling that we still see some of the people we have arrested and handed over to the Police on the street gallivanting around.

“Our governor is doing the right thing but we don’t really have superior power over the constitution guiding us.

“So, when it comes to the issue of insecurity, there is nothing the state government can do if the Federal Government fails to do the needful.

“If our governor orders Police to carry out an assignment and another order comes from the Federal Government, definitely nothing will be done.

“So, don’t let us deceive ourselves. Even our governor cannot command the Army and he has no power over it.

“Now, 70 percent of our farmers in Ibarapa have left their farmlands. They no longer farm. If we do not succeed in having State Police, the states will continue to be puppets under the Federal Government.

“We are just operating an adulterated federal system of government. What we have today is a unitary system; under it, the state has no power to save its people.

“f you apprehend a criminal and hands him over to the police, if the Inspector-General of Police instructs the Commissioner of Police to release him, the CP will ignore the governor and carry out the instruction of the IGP.”

Earlier, Governor Makinde promised to provide adequate security for the lives and property of residents, irrespective of constraints faced by all in the state.

At the meeting, the governor, who stressed that security was one of the cardinal points of his administration, also pointed out that security also formed the content of his accelerated roadmap to development from 2019 to 2023.

His words: “I have said before that security cannot work without intelligence gathering and we cannot gather intelligence without getting closer to the people.

“In all of the troubled areas across our state, the royal fathers often get information before we do, and that is why it is important that we must collaborate with you.

“The reason we are in this meeting is that security is one of the four pillars of our administration and one of our key policies as contained in the roadmap for accelerated development in Oyo State.

“If our plans are to work effectively, we need the buy-in of everyone in Oyo State, but most importantly, you, our fathers in each of our communities, we need your buy-in and that is why I have invited you for this meeting today”, the governor said.