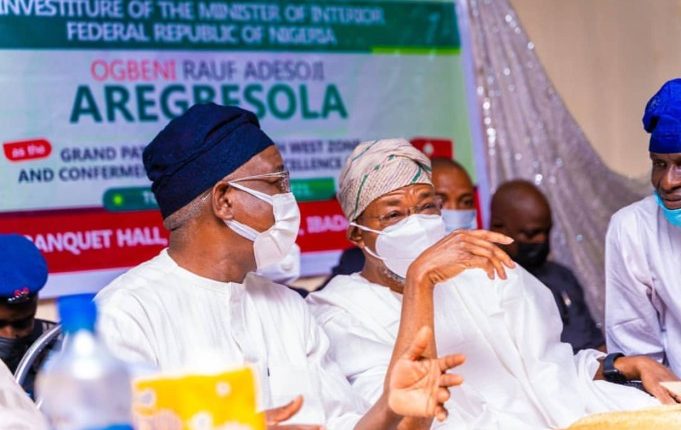 Speculation have risen as regards the continued stay of the Oyo state deputy governor, Engr. Rauf Olaniyan in the People’s Democratic Party (PDP) as he meets with former osun state governor Rauf Aregbesola on Friday.

The meeting which was adjudged to be a top secretive one happened some miniuites after Arrive was invested as the grand patron of the Nigeria Union of Journalists, NUJ, in the Southwest.

The duo met inside one of the rooms at Calton Gate hotel, Idi-Ape, shortly after leaving Premier Hotel, venue of the investiture.

Olaniyan and Makinde, this newspaper understands, are only managing each other as many party leaders are angry with the governor over alleged negligence in the appointments of aides and running of party affairs.

Though details of their meeting were still unknown as at press time, Aregbesola later met chieftains of the APC, who had come to show support.

Though the deputy governor did not pick his call when OYOINSIGHT.COM attempted to speak with him, a close confidant of the Igboho-born former permanent secretary dismissed possibility of his man joining the APC.

“They have been friends before now. In fact, he informed his boss, Governor Makinde, become going to the event. I think was a case of brother supporting his brother. Are you insinuating anything because only the two of them met inside the room? Just dismiss it, they are just cordial,” the source said.

This newspaper learnt that Olaniyan, while extolling the virtues, had said, “my relationship with Aregbesola defies political ideology. I am close to him. He is my political mentor. Aregbesola is an Omoluabi. He is a leader Nigeria needs to develop. He is committed to the development of his state and Nigeria. He is not after money. He is a genuine leader, passionate about the country.