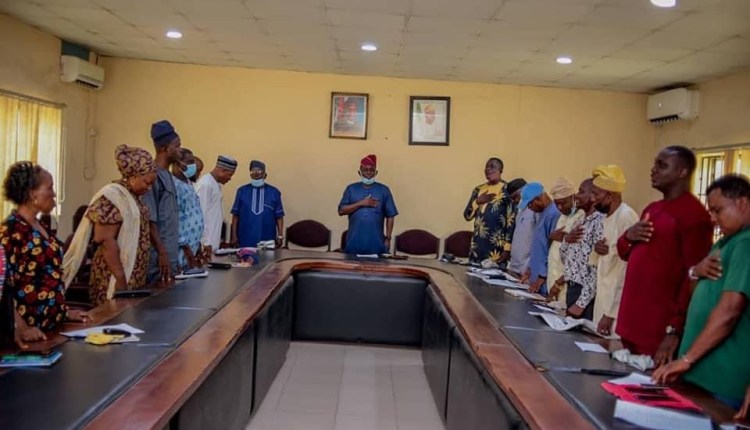 The Chairman , Oyo State Independent Electoral Commission , ( OYSIEC ) , Aare Isiaka Abiola Olagunju , SAN, has urged members of the political parties in the state to intensify more efforts on their preparations for local government council elections in order to achieve their set goals .

He made the call, while addressing members of registered political parties in Oyo State at OYSIEC Office , Agodi Quarters , Ibadan .

Aare Olagunju , who commended the executives of political parties for their cooperation towards the success of the elections, called on leadership of political parties to further educate thier followers on the need to maintain good conduct during the campaign and on election day .

He hinted that the commission is still consulting on their request for the reduction of prescribed fee to allow all political parties to participate actively in the elections.

” Our target is to have the election as planned , political parties are equal before us , and we are extremely determined to be transparent “

” We appreciate political parties that have acted based on our request, while appealing to remaining parties to kindly do the needful within the time frame agreed upon “

How A Serial Rapist, Raped A Job Seeker Before Burying Her…

” On our part, the election will be fair, free, credible and transparent ” Olagunju added .

In their Separate Remarks, The State’s Chairman , Inter Party Advisory Council ,Otunba Adegbenro Fagbemi and National Vice Chairman , All Progressive Grand Alliance( APGA), South West , Dr. Samson Olalere, emphasized the need for political parties to identify localities at which they have the possibilities of emerging victorious during the elections , and strategise accordingly .

The IPAC chairman also appealed to all and sundry to give OYSIEC the benefit of doubt, as regard its pledge of conducting credible elections , come May 15, 2021 by participating actively in the poll.

His words “The integrity of

OYSIEC team is at stake,and we cannot judge or conclude that there won’t be a level playing field for all political parties as promised by the commission, until after the elections “

” The task ahead concerns the electorates, political parties and the umpire itself”

” We have to come together to develop our dear state , so, let’s give the commission the benefit of doubt and feed credible candidates for the elections “.

The stakeholders’ meeting, scheduled to hold continually, had in attendance the representatives of political parties that have presence in the state .

How Water-Vendor Was Beaten To Death, Burnt After Alleged Blasphemy

What I Told Makinde Before Taking OYSIEC Job– OYSIEC Boss