How I Met My Wife During Activism – Late Yinka Odumakin 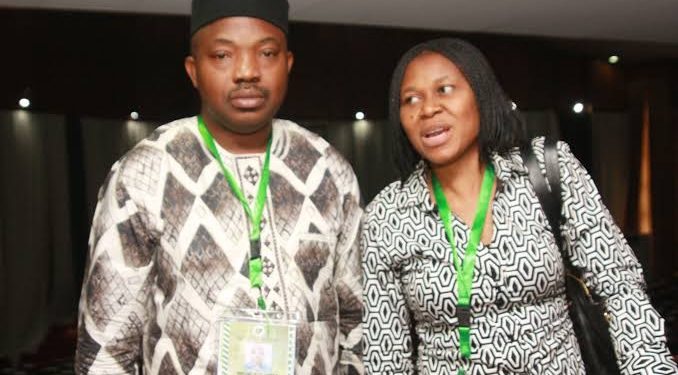 While confirming his death, his wife, Joe said her husband is part of her and he has gone. Joe revealed that he fought hard at the intensive care unit while he urges people to pray for her to survive her husband’s loss.

She said: “My love is gone. He was okay before. He was recovering yesterday but he died this morning. I am at the intensive care unit. A part of me is gone.”

Odumakin was married to Dr. Joe Okei-Odumakin, a women’s rights activist. They got married on November 4, 1997 and their marriage was blessed with children.

In a throwback interview the couple granted The PUNCH in 2016, Yinka Odumakin and wife revealed how they both met as activists.

What initially attracted you in your spouse?

Yinka: I was first attracted by her guts. I was swept off my feet that a woman could be that bold in a season where a lot of men were lily-livered.

Joe: Like the circumstances that led to our meeting and eventual resolve to become husband and wife, what attracted me to him was his courage. At that point in time, I was unwilling to be in company with anyone who could discourage me from the cause I have faced squarely. Therefore, he became someone who perfectly fit into that desire.

Was there any objection to your marriage by any family members?

Yinka: There were no objections from either side. We were both largely independent characters who had already shown the kind of lives we wanted to lead for anybody to want to dictate our choice of partner.

Joe: At no time did any of our family members object to our decision to marry each other. It was a decision between two people who were already independent, educated and considered reasonable enough to make right choices.

What is the experience like, having two public figures in a marriage?

Joe: We have continued to grow to accept as our own inevitable reality because it puts so much outside responsibilities on us, than even our domestic and immediate families’ demands. That nonetheless, we are not negatively affected because of our passion for what we do, which is the basis for our being seen as public figures.

For how long have you been married?

How do you create time for each other since you are both busy as celebrities in the country’s political and human rights spaces?

Yinka: Life is about setting priorities and living one’s passion. It becomes stress free once one is living one’s dream. Every hour of one’s life counts and one should be able to cut away time-wasting exercises. One gives up certain things to pursue the things that are important to one. We have discovered that many people spend a great percentage of their time doing things that add no value to their lives or living to please societal expectations even when such do not align with their goals. The first most important thing in life is to have a clear idea of where one is going and focus on it. Within that prism, we have been able to strike a balance between public life and private space.

Joe: Even though our individual engagements have limited the time we should normally have for hanging out either privately or for social engagements, we still create time periodically to hang out as couples.

Your first disagreement was over what?

Yinka: Our first disagreement that I remember was that after marriage, my wife wanted us to live outside Lagos because she had been used to the serene and peaceful ambience of Ilorin where she spent many years. But I insisted on Lagos.

Joe: I recall that it was basically due to my desire to live in Ilorin after our marriage because I had spent a good part of my life there. I enjoyed the serenity and the relatively stress-free life there. My major reason for being in Lagos during the time was for activism. It was eventually resolved and today, I have become more comfortable in Lagos than anywhere else I can find myself in the world.

How has the arrival of children shifted attention from your husband to them?

Joe: The arrival of kids never created any room for a shift of attention from each other. Rather, it has only expanded our focus and capacity to exist together as one big and very united family.

What are the lessons learnt and challenges encountered in your marriage?

Yinka: The major lesson learnt so far is that we have been able to shatter the wrong perception that a couple who both have strong views and character cannot sustain a marital union. Every marriage has its occasional challenges but the enduring human spirit and undying commitment subdue them all. The loss of our daughter 17 years ago was one tragedy that took us a while to get over but God was able to heal the pain.

Did you desire a particular gender as your first child before marriage?

Yinka: We never had any preference regarding the sex of a child We were sufficiently liberated enough to know that success in life is not about gender.

What pet name do you call each other?

Yinka: We started out as comrades in the trenches and that is what we still call each other.

Joe: I call him comrade.

Would you choose your spouse again if you were to make a choice and why would you do so?

Joe: I will definitely do because I found a like mind in him. Someone who shares my ideological belief, well equipped intellectually and fits into the class of a man I would forever wish to marry. He perfectly suits my kind of man and I will marry him over and over again.

What major lessons have you learnt in marriage?

Joe: Marriage is an institution where one can never be certified outstanding. One can never graduate from the institution of marriage because day in, day out, there are lessons to be learnt. But I must say that I have learnt a lot about being able to realise the need to be supportive of one’s spouse if one really desires to achieve the home of one’s dream.

What are the secrets of your successful marriage despite your busy schedule and your wife’s?

Yinka: We have aligned our marital life with our vision of life and surrendered the rest to the Almighty God .We have also learnt to respect ourselves with the capacity to allow the other to pursue chosen course of action based on conviction even when the other person has reservations .We have equally developed a strong ear power over the years to be able to listen very well to each other.

Why do you think most celebrity marriages do not last?

Joe: In my opinion, it is due to lack of understanding of each of the parties before signing the pact of marriage. Most times, what attracts some of the celebrities to marriages has been terminated untimely. It is either the fame of either of the partners and not necessarily the quality inherent in such person. Therefore, the moment there is a decline in the quality, they find it difficult sustaining the love.

Prince Adeaga Elected as the Next CCII President-General