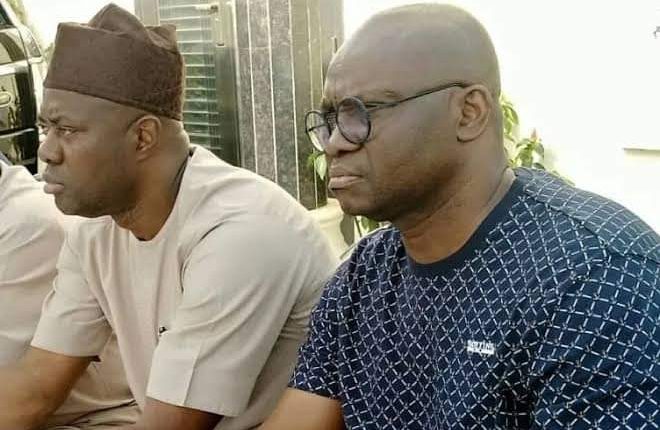 The battle for the soul of the Peoples Democratic Party (PDP) in the Southwest between Governor Seyi Makinde of Oyo State and the immediate past governor of Ekiti State, Mr. Ayodele Fayose, is causing more division among leaders and chieftains of the party within and outside the zone, TODAYSPLASH learnt on Saturday.

There are also strong indications that efforts by the leadership and other organs of the party to reconcile the warring factions in the zone ahead of Saturday’s rescheduled zonal congress, may have failed.

The PDP on Wednesday fixed April 10 for its postponed Zonal congresses in the Southwest, Northwest and North Central zones.

The new date was communicated in a March 31 letter signed by National Chairman, Uche Secondus and the National Secretary, Senator Umar Tsauri.

According to the letter, the Southwest congress will take place in Ibadan, the Oyo State capital, while that of the Northwest is scheduled for Kaduna and the North Central’s in Makurdi, Benue State.

But the decision to hold the Southwest congress in Ibadan, the Oyo State capital, has not gone down well with some PDP NWC members.

TODAYSPLASH gathered that while the National Organising Secretary, Col. Austin Akobundu (rtd), and some others insisted that the congress should go ahead in Ibadan, the national legal adviser objected, citing a court case instituted recently.

The NWC is yet to reach a decision on the dispute.

Fayose and Makinde have been at loggerheads over the next leadership of the party in the Southwest.

The exercise, which was held in some other zones, was postponed due to the scuffle between the two groups which led to the procurement of a court injunction by one of the parties, stopping the congress. Supporters of the two PDP chieftains also engaged in a fierce war of words.

While Makinde is sponsoring Taofeek Arapaja, a former Oyo deputy governor, Fayose is supporting Eddy Olafeso, a former governorship aspirant in Ondo State and the immediate past chairman of the party in the zone.

Following the postponement, both the national leadership of the party and the Senator Bukola Saraki-led reconciliation committee allegedly made spirited efforts to reconcile the groups and prepare a peaceful path for the congress to eventually hold at a later date.

But, according to reliable party sources, the peace efforts failed as the two camps refused to shift grounds.

“There is no agreement whatsoever. Yes, the congress will hold because it can no longer be delayed further,” a source familiar with the matter said.

“It is a constitutional matter and if delayed, may affect the party’s chances of fielding candidates for the next elections in the zone. The implication of the failed peace moves is that the congress will hold with the warring factions fighting dirty in their bid to control the party in the zone.

“The idea of the initiators of the peace moves was to have the positions shared among the gladiators, but that failed to materialise.”

Makinde in a statement on Friday said the decision of the National Working Committee of the party to go ahead with Saturday, April 10, as the congress date is commendable.

He said: “As the only serving PDP governor in the Southwest and an invested party in the PDP’s growth and development, I commend the National Working Committee (NWC) for the decision to go ahead with the Southwest Congress.

REVEALED: Why Some People Are Threatening Me With Second…

Oyo APC And Its Shameless Dance In Public Over BCOS Is…

“I am glad that they bowed to superior reasoning regarding the congress. I am also happy that the congress will be held in Ibadan, Oyo State, in line with our party’s constitution and as stipulated in paragraph 8 (1) (g) of the Guidelines for the Conduct of Ward, LGA, State, Zonal Congresses and National Convention for the purpose of electing Party Executive Committees at all levels which was issued and signed in January 2020.

“We look forward to hosting other members of the Southwest PDP come April 10.”

The governor warned that any attempt to shift the Southwest Congress’s date is a signal that the hierarchy has been compromised.

“Such an action would have dire consequences. For one thing, we will be forced to take all necessary measures to take back our party. Let me restate that the PDP is the best alternative for Nigerians. At this moment, we should be expanding our energies in positioning our party and gearing up for leadership at the national level. We must show Nigerians that we are the real deal,” he said.

But one of the contenders to the position, Olafeso disowned the April 10 date of South West Zonal Congress, allegedly scheduled to hold in Ibadan, Oyo State capital, saying it is only “flying on the social media platforms.”

He spoke in Osogbo on Friday while being endorsed for the position by Osun state delegates. Akéde Ọ̀yọ́ gathered that the two camps are yet to come to agreement on the venue of the rescheduled congress, among other things.

“Even as we speak, there is still a very strong lobby by one of the factions to make the NWC change the venue. That is why the Oyo state governor is warning the national leadership not to tamper with the current arrangement which is according to the party’s constitution.

“I can also confirm to you that the Makinde camp now has the support of the majority of the party’s governors as well as that of the National Assembly caucus of the PDP in the southwest.

“The governors are insisting that as the only governor in the zone, Makinde deserves more respect from the national leadership of the party than he has been getting. It was their intervention that forced the NWC to adhere to the constitution and make the current arrangement.

“But the Fayose camp is uncomfortable with Ibadan, the Oyo state capital, as the venue of the rescheduled zonal congress for obvious reasons, and are prepared to have it changed,” our source added.

TODAYSPLASH also gathered that some prominent chieftains of the party within and outside the zone are in support of Fayose and his supporters in their quest to produce the leadership of the party in the Southwest.

According to sources, the national chairman, Uche Secondus, is currently under severe pressure to reconsider the choice of Ibadan as the venue of the congress. Our correspondent gathered that a petition has already been submitted by some stakeholders, objecting to the venue and citing Makinde’s role in the feud that led to the earlier postponement as reasons.

“While it is true that most governors and Southwest National Assembly members are supporting Makinde, Fayose enjoys the support of the majority of NWC members from the zone. The camp of former Vice President Abubakar Atiku as well as majority of the state party chairmen in the zone are solidly behind Fayose’s camp as far as the rescheduled congress is concerned.

While Fayose is yet to publicly reject the venue, a number of his allies have spoken against Ibadan. These are pointers to what you should expect.

“Consequently, Secondus is under pressure to bulge and change the venue. There are also rumours that the Southwest zonal congress may be postponed again.

PDP governors, determined to save one of them from embarrassment, are said to have decided to meet with Secondus during the week to warn him against giving undue advantage to the Fayose camp. They strongly believe Makinde, as the only governor in the zone should be allowed to lead the party as is the practice within the party,” our source explained.

In Osun state, two factions, led by Soji Adagunodo and Sunday Bisi respectively, are laying claims to the right to present delegates at the congress on Saturday.

“As of today, both camps have their delegates ready and are making arrangements to go to Ibadan and vote in the congress. While Adagunodo and his supporters are loyal to Makinde, Bisi’s group belongs to the Fayose camp. Both camps recently openly endorsed their preferred candidates,” another source told Akéde Ọ̀yọ́ while explaining the division within the PDP.