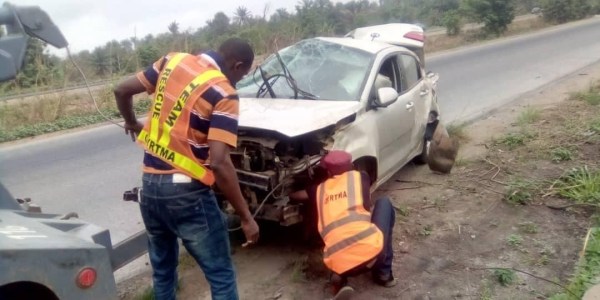 The Fast-track Emergency Rescue Operations Team of the Oyo State Road Transport Management Authority (OYRTMA) has rescued not less than two victims of an auto crash involving a lone Grey-colored Kia vehicle with registration number LND-813-GB at the Ojoo-Akinyele Road in Ibadan metropolis.

Our investigations revealed that the incident which occurred during the Holy Saturday of 3rd April 2021 was due to over-speeding, reckless and careless driving on the part of the driver which resulted into vehicular summersault with the driver and the lone passenger sustaining serious injuries.

It took the instantaneous intervention of our Rescue Team to save the lives of the victims who were immediately rushed to the hospital for proper medical attention and the affected vehicle removed from accident scene.

The Authority uses this medium to harp on the need for motorists to drive with caution and at approved speed limits to avoid such catastrophes of huge proportion noting that while speed thrills, it also kills.

The Executive Chairman, Mogaji (Dr.) Akin Fagbemi had prior the Easter festivities reeled out numerous operational changes of the Authority and proactive measures put in place to ensure an itch-free Easter period viz night and day traffic control, 24/7 emergency rescue operations, enforcement of Operation-One-Passenger Policy as well as collaboration with other sister security agencies.

Furthermore, he beseeched the people of Oyo State to remain vigilant, drive more carefully and support the drive of the Governor Seyi Makinde’s administration in ridding the roads of avoidable road crashes and loss of lives as he reiterated that the vigilance of everyone means safety for all while negligence of anyone portends danger to all.