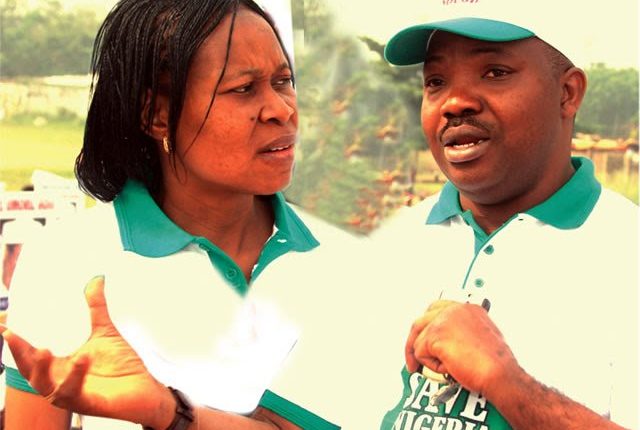 Dr Joe Okei-Odumakin, the wife of the late spokesman for Afenifere, Yinka Odumakin, has reacted to the outpouring of tributes in honour of her late husband.

She said she wished her husband could hear what those he criticised were saying about him.

Joe spoke to our correspondent at her residence on Kayode Alli Street, Omole Phase 1 Estate, Lagos.

Yinka, a vocal activist and columnist, died at LASUTH on Saturday from COVID-19 complications.

His wife told The PUNCH that he was recovering and had asked for his phones and gadgets before he relapsed and died.

She said, “It all started on March 8 when he said he had a series of meetings and appointments to make. But he went to see his physiotherapist and discovered that his oxygen level had dropped.

“After the doctor attended to him, it was discovered that he had COVID-19 and was transferred to the isolation centre at the Lagos State University Teaching Hospital, Ikeja.

“The next day, his oxygen level dropped a bit more and we had to move to the Mainland General Hospital, Yaba. He was put on a ventilator at the hospital. After a few days, he tested negative.

“So, he was moved to the LASUTH Intensive Care Unit. While at the ICU, his kidney, liver and other body parts were okay. The issue was respiratory; he had problems with breathing, which they said was due to his lungs which were affected in the aftermath of the infection.

“I did not share these details because I wanted him to tell the story of his survival, which would have been sweeter, and I was looking forward to that. I never believed that he would die. It’s so difficult for me to use past tense for him after being together for 24 years.

“All of a sudden, I got the news from someone in the US (who sent a WhatsApp message) and I thought that the person did not know what he was saying because I was looking forward to reuniting with him. He (Yinka) had also asked after his son after he regained consciousness. He told me that the first thing he wanted immediately he came out was his Ipad and two phones, and I had them in the vehicle. When I heard that the worst had happened, I was in shock.

“The people with me were telling me that I should not go to see his body, but I refused. I moved in and saw his face was covered; I removed the cloth. I was given gloves. I started saying a lot of things to him, but he did not respond. That was when I knew that comrade was gone.”

The President, Major-General Muhammadu Buhari (retd), and a former Lagos governor, Bola Tinubu, who had been criticised by the late Yinka, were among dignitaries who paid tributes to his memory.

Joe said she wished her husband was alive to read what they said about him.

“It would have been soothing if Yinka was around to see this. At times, we need to celebrate people when they are around; even if they will critique what we have to say and refer to what they had written and said about us. People are following the trend of events and they will be the best judge,” she added.

Among dignitaries that had visited the residence of the deceased were the Aare Ona Kakanfo, Aare Gani Adams, and the Sector Commander of the Federal Road Safety Corps, Olusegun Ogungbemide.

Meanwhile, the Vice-Chancellor of the Obafemi Awolowo University, Prof. Eyitope Ogunbodede, described the death Odumakin as a monumental loss to the country, the human rights community and the OAU.

The statement said, “As an Alumnus, he assisted the Faculty of Arts in raising funds for a few projects that were of immense benefits to the staff and students.”

I thought it was April Fool Day’s prank – Ozekhome

Also, constitutional lawyer and human rights activist, Dr Mike Ozekhome (SAN), on Sunday described Odumakin as a “courageous wordsmith whose pen is mightier than the sword.”

Ozekhome in a statement said, “When I saw a posting concerning Comrade Yinka Odumakin’s death, I thought the poster was still carrying out the pranks of ‘April Fool’s Day’… Out of sheer curiosity, I called one of our soul mates in the human rights and pro-democracy world, Dr Joe Okei Odumakin, who has been a life-long Yinka’s wife.”

He added that he was devastated when Joe confirmed Yinka’s death, adding that he had “not found my clarity of thought since then.”

Likewise, a former Presidential candidate, Gbenga Olawepo-Hashim, has described the late Odumakin, as a man of extraordinary courage that stood by his words.

The businessman, in a statement on Sunday in Abuja, expressed deep shock over Odumakin’s death, saying Nigeria had lost one of the greatest patriots.

Olawepo-Hashim said, “To say Nigeria has lost another great is to put it mildly.He was one of the greatest… My condolence once more to Joe, Yinka’s wife who I knew separately as a comrade and as a friend. I pray God to give her and the family the fortitude to bear the loss.”

The minority caucus in the House of Representatives has said it is grieved over the death Odumakin.

Describing Odumakin as an advocate of good governance, the caucus said his death “is a big blow to our nation, particularly in his quest for the entrenchment of democratic tenets of rule of law, justice, equity and fairness in our national life.”

The Minority Leader of the House, Ndudi Elumelu, made this known in a statement ion Sunday and titled, ‘Yinka Odumakin Stood for Justice, Equity and Fairness.’

Ooni, in a condolence message s by his Director of Media and Public Affairs, Moses Olafare, said, “The unbeatable fact about this great patriot is that he served the Oodua race incorruptibly till his death; enhanced Nigeria’s democracy through his countless calls and actions for justice and equity.

“He was a blunt dogged fighter who never compromised his struggle for the betterment of his Oodua race and that of Nigeria for personal friendship.”

Don Jazzy’s Ex-Wife Speaks, Revealed What Happened After Her Estrange Husband Announced How They Once Married (PHOTOS)

How I Met My Wife During Activism – Late Yinka Odumakin