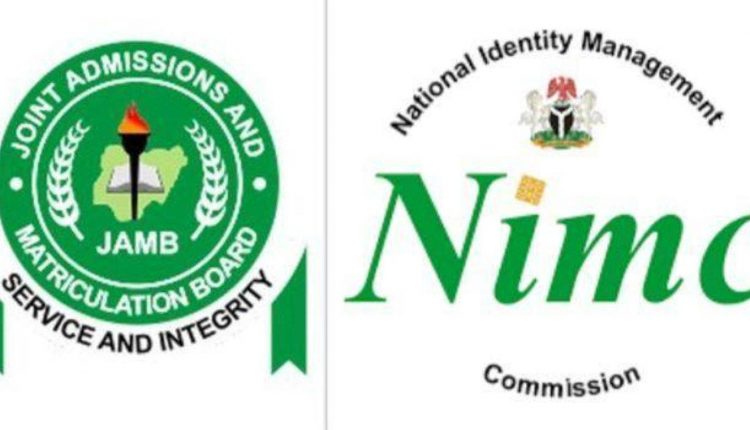 The Joint Admission and Matriculation Board has postponed the earlier scheduled Unified Tertiary Matriculation Examination, UTME and Direct Entry Registration overt ssues around National Identity Number (NIN) integration and other issues

JAMB explained in a statement by its Head of Media and Protocol, Dr Fabian Benjamin, that the development was “caused by some unforeseen circumstances occasioned by our determined effort to have a NIN integration.”

“The Board’s registration exercise was speculated to begin today 8th April 2021. To be sure all processes are completed before the commencement, the Board didn’t place its advertorial as it was yet to complete the process of a smooth pin vending and candidate access to the registration app for the 2021 UTME/DE,” it explained in the statement.

The statement further explained that:”

The advertisement is the surest indication of the beginning of the exercise as it has all the step by step process that candidates are required to follow.”

“However, this delay is caused by some unforeseen circumstances occasioned by our determined effort to have a NIN integration.

“This challenge is being resolved and once that is done, all processes shall commence.

Candidates are therefore requested to exercise some patience.

“The process shall be up and running shortly for our advertisement to be rollout so that candidates can begin the creation of profile,”it further said.

Okowa felicitates with David Mark at 73

Delta Governor Dr Ifeanyi Okowa has congratulated former President of the Senate, Sen. David Mark, on his 73rd birth anniversary, describing him as an inspirational leader.

In a statement on Thursday in Asaba by his Chief Press Secretary, Olisa Ifeajika, the governor rejoiced with the family, friends and political associates of the former military officer and gentleman, who served the country in various capacities as military governor, minister and lawmaker.

He stated that the leadership qualities of the former boss of the Senate were worthy of emulation, saying he was a great democrat, astute administrator and a leader of inestimable value.

The governor noted that the 6th and 7th Senate unarguably performed creditably because of the inspirational leadership offered by Mark as President of the upper chamber at those times.

He added that as Chairman of the National Assembly, Senator Mark led both chambers to perform their constitutional role of making laws and oversight the executive.

According to the governor, Senator Mark’s dedication to the course of peace and stability in Nigeria during the eight years he served as President of the Senate is unprecedented and unparalleled.

“Let me say once again that it was during his tenure that some constitutional lacuna arose and he brought in the ‘Doctrine of Necessity to address the situation.

“The Senate and the National Assembly under your astute leadership recorded huge successes, especially in the passage of the National Health Act.

“On behalf of my family, the government and the people of Delta, I congratulate a distinguished Senator, an officer and a gentleman, Senator David Mark, on the occasion of his 73rd birth anniversary.

“We rejoice with you, members of your family and political associates in celebrating a life of great accomplishments in public service.

“It is our prayer that God will continue to grant you greater years ahead to continue in your service to our great nation,” he stated.

Hijab: We Will Push For Our Children To Wear Our Beads, Emblems In Schools, Organisations — Ifa Priest, Elebuibon