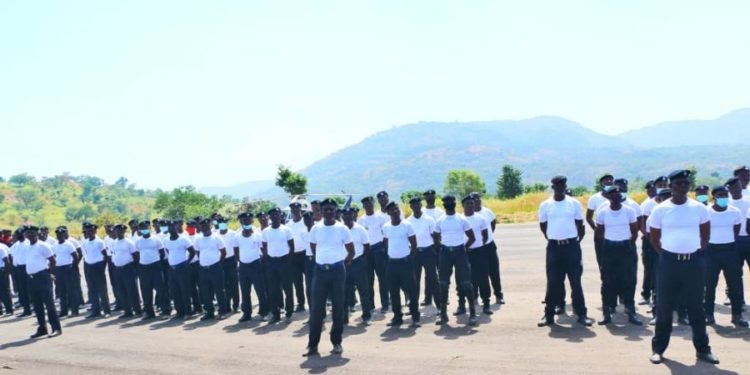 The Federal Special Weapons and Tactics (SWAT) unit has arrested seven suspected robbers who specialised in attacking people in Lekki and environs.

It was gathered the suspects usually operated in a seven-passenger bus usually driven by Seun Adeniyi.

Unknown to their victims, they allegedly hid firearms, machetes and other dangerous weapons in the bus which they used to assault, threaten them to drop all their belongings.

EFCC Acting Chairman Promoted to Level 14 Ahead of Senate…

ENDSARS Protest: Adelabu Moves Ahead Of Oyo Govt. To…

Their arrest was said to have followed weeks of surveillance by undercover detectives led by SP Ibrahim Yusuf.

All the suspects, police said, were residents of Jakande Estate in Lekki, adding that Adetola was the alleged receiver of loots and armourer for the gang.

According to the police, Adetola who operated a barber’s shop at Jakande Estate was found with two pump action guns, knives and five expensive phones valued at N350, 000.

In his alleged confession to the police, Adeniyi, the gang`s divers said: “While I drive the bus, two others will sit inside like passengers while the other will stand on the door as a conductor and calling passengers and once the bus is filled up we would zoom off and rob the passengers, and pushed them off the bus and escape.”

Contacted, spokesman for the Force Criminal Investigation Department (FCID) Alagbon, Niyi Ogundeji, said all the suspects were arrested with arms and have confessed to the crime.

He said the suspects would be charged to court at the conclusion of investigation.